Julius Springer Prize for Applied Physics to Atwater and Polman

Scientists honored for their pioneering achievements in plasmonics and nanophotonics 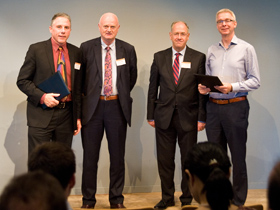 This year’s Julius Springer Prize for Applied Physics was awarded to Dr. Harry A. Atwater (Caltech Pasadena, USA) and Dr. Albert Polman (FOM Institute AMOLF, Amsterdam, The Netherlands) for their pioneering achievements in plasmonics and novel nanophotonic routes to ultrahigh-efficiency solar energy conversion. The award, accompanied by US$ 5,000, was presented on 1 September at the Muziekgebouw in Amsterdam during the “Julius Springer Forum on Applied Physics 2014".

Atwater and Polman have made key contributions to the research area of nanophotonics, the science of light at the nanoscale. In particular, they have pioneered the use of metallic nanostructures that support optical resonances called surface plasmons, to control light at the nanoscale. A key novel insight of their research regards the use of optical nanostructures in photovoltaics. Atwater and Polman have demonstrated how light can be more efficiently absorbed and trapped in solar cells by integrating nanostructures in the solar cell. This enables the fabrication of ultrathin solar cells that can be made at reduced costs, as well as new solar cell architectures with increased efficiency. Atwater and Polman have been collaborators for over 20 years. They have both developed new measurement instruments and fabrication technology that has led to start-up companies.

Harry Atwater is the Howard Hughes Professor of Applied Physics and Materials Science at the California Institute of Technology. His scientific interests have two themes: plasmonics and optical metamaterials as well as photovoltaics and solar energy conversion. Atwater is an early pioneer in nanophotonics and plasmonics, giving the name to the field of plasmonics in 2001. He currently serves as Director of the DOE Energy Frontier Research Center on Light-Matter Interactions in Solar Energy Conversion, and is also Director of the Resnick Institute for Science, Energy and Sustainability at Caltech. He is co-founder and chief technical advisor for Alta Devices, a technology company in Santa Clara, CA.

Albert Polman is the scientific group leader at the FOM Institute AMOLF in Amsterdam, where he heads the program “Light management in new photovoltaic materials.” He is professor of Photonic Materials for Photovoltaics at the University of Amsterdam. Polman's research focuses on nanophotonics, with special emphasis on light management in solar cells and optical metamaterials. Polman is co-founder and technical advisor for Delmic, a start-up company that develops a cathodoluminescence imaging spectroscopy instrument developed in Polman’s group.

The Julius Springer Prize for Applied Physics recognizes researchers who have made an outstanding and innovative contribution to the fields of applied physics. It has been awarded annually since 1998 by the Editors-in-Chief of the Springer journals Applied Physics A – Materials Science & Processing and Applied Physics B – Lasers and Optics.

Springer Science+Business Media (www.springer.com) is a leading global scientific, technical and medical publisher, providing researchers in academia, scientific institutions and corporate R&D departments with quality content via innovative information products and services. Springer is also a trusted local-language publisher in Europe – especially in Germany and the Netherlands – primarily for physicians and professionals working in healthcare and road safety education.

About the journal Applied Physics A

Previous winners of the Julius Springer Prize for Applied Physics

Program of the “Julius Springer Forum on Applied Physics”