Eight of the nine Nobel laureates in medicine, physics, chemistry and economics are Springer authors 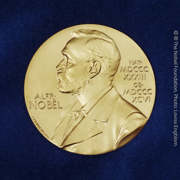 Of this year’s winners of the Nobel Prizes in medicine, physics, chemistry and economics, almost all have published in Springer books or journals. The new laureates will be awarded the prizes in Stockholm on 10 December 2015, marking the anniversary of the death of Alfred Nobel. Each laureate receives a medal, a certificate and prize money.

The Nobel Prize in Physiology or Medicine is awarded one half jointly to William C. Campbell and Satoshi Ōmura “for their discoveries concerning a novel therapy against infections caused by round worm parasites.” Youyou Tu received the other half “for her discoveries concerning a novel therapy against Malaria.” At Springer, William C. Campbell is the editor of two books Ivermectin and Abamectin and Trichinella and Trichinosis and is the co-editor of the book Chemotherapy of Parasitic Diseases. Satoshi Ōmura is the editor of the Springer book The Search for Bioactive Compounds from Microorganisms, and has published numerous articles in Springer journals such as the Journal of Industrial Microbiology & Biotechnology, Mycoscience and BMC Infectious Diseases.

Takaaki Kajita and Arthur B. McDonald have won the Nobel Prize in Physics “for the discovery of neutrino oscillations, which shows that neutrinos have mass.” Takaaki Kajita has published articles in the Springer journals The European Physical Journal H, Pramana, and Space Science Reviews and book chapters in Matter in the Universe and Physics and Astrophysics of Neutrinos, among others. Arthur B. McDonald has co-authored articles in Hyperfine Interactions and Il Nuovo Cimento C, which has since been integrated into the European Physical Journal. He is also the co-author of chapters in Springer books such as Weak and Electromagnetic Interactions in Nuclei and Neutron Capture Gamma-Ray Spectroscopy.

The Nobel Prize in Chemistry goes to Tomas Lindahl, Paul Modrich and Aziz Sancar “for mechanistic studies on DNA repair.” Lindahl has co-authored articles in the Springer journals Genome Biology and Molecular and General Genetics and published chapters in many Springer books including Chromosome Damage and Repair and Mutation, Cancer, and Malformation. Paul Modrich has published his research in Cancer Chemotherapy and Pharmacology and Mechanisms of DNA Damage and Repair. Aziz Sancar has co-authored many articles and book chapters in Springer publications such as Cell Biochemistry and Biophysics, BMC Neuroscience and DNA Repair.

Angus Deaton has been awarded this year’s Sveriges Riksbank Prize in Economic Sciences “for his analysis of consumption, poverty, and welfare.” He is the author of the Springer book Models and Projections of Demand in Post-War Britain. He has also published his research in the Springer journals The Review of Austrian Economics, Demography and the Journal of Economic Growth.

More than 200 Nobel Prize winners in the fields of medicine, physics, chemistry and economics have published with Springer, among them a winner of the Nobel Peace Prize.

Springer Nature (www.springernature.com) is a leading global research, educational and professional publisher, home to an array of respected and trusted brands providing quality content through a range of innovative products and services. Springer Nature is the world’s largest academic book publisher, publisher of the world’s highest impact journals and a pioneer in the field of open research. The company numbers almost 13,000 staff in over 50 countries and has a turnover of approximately EUR 1.5 billion. Springer Nature was formed in 2015 through the merger of Nature Publishing Group, Palgrave Macmillan, Macmillan Education and Springer Science+Business Media. Find out more: www.springernature.com and follow @SpringerNature