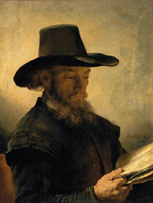 On 9 October 2014, the world renowned Rembrandt expert Ernst van de Wetering presented the sixth and last volume of A Corpus of Rembrandt Paintings at the Frankfurt Book Fair. The book is entitled Rembrandt’s Paintings Revisited - A Complete Survey.

The Rembrandt Research Project (RPR) began in 1968. It was initiated by a team of Dutch art historians with Ernst van de Wetering as their assistant. The aim of the team was to compose an unprecedentedly detailed catalogue of all the paintings by Rembrandt van Rijn (1606-1669).

The demarcation of the extent of Rembrandt’s autograph oeuvre since Wilhelm von Bode’s catalogue of 1897-1906 had gone through a tumultuous history. This was partly due to the fact that Rembrandt’s pupils adopted his manner of working by imitating his style and tech-nique, as was then normal training practice. Up to the late 20th century connoisseurship, the intuitive recognition of an artist’s hand was thought to be the only way to bring order to this chaos. The Dutch team’s goal was to present a well-founded alternative to connoisseurship by making use of research techniques used in the natural sciences. The first three volumes with the results of the team’s work appeared in 1982, 1985 and 1989. In those volumes, the paintings from 1625-1642 (the year of the Night Watch) were catalogued in chronological order. However, assembling and interpreting the data obtained by scientific research lagged behind the actual production of the volumes and also appeared to be more and more irrelevant. The team reverted to traditional connoisseurship of a kind – also used by other Rembrandt scholars – in which analysis of style and (overly strict) application of stylistic criteria provided the main arguments for attributing to or the disattributing of a painting by Rembrandt.

Ernst van de Wetering, originally trained as a painter, became in 1971 a full member of the team and a staff member of the Central Research Laboratory of Objects of Art and Science in Amsterdam. He became increasingly worried about the results of this approach.

After the members of the initial team retired, he continued the project together with a small team of specialists from various disciplines. He introduced a different methodology, applying converging objective criteria, in themselves not necessarily conclusive. His approach was based mainly on the a priori position that a painting is not only an image but, above all, the result of a multifaceted process of creation in a specific context. This resulted in two volumes organized thematically – Volume IV on self-portraits (2005) and Volume V on small scale history paintings (2010). Here many of the earlier paintings were reassessed with a major emphasis on scientific methodology, analysis of the painting’s genesis, presumed function and the place of the painting in the emerging oeuvre as a whole.

Also available as an eBook and Special Cover Type.

Selected images and online access to the book are available to journalists upon request.