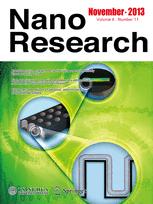 Professor (Prof.) Charles M. Lieber – the Mark Hyman Professor of Chemistry at Harvard University – has been presented with the first-ever Tsinghua University Press-Springer Nano Research Award. Mr. Junfeng Zong, the President of Tsinghua University Press and Dr. Lu Ye, Managing Director and Editorial Director of Springer China, presented the award certification, while Profs. Hongjie Dai and Yadong Li, Editors-in-Chief of the journal Nano Research, jointly presented the award medal to Prof. Lieber. The award is accompanied by a cash prize of US $10,000. After the award ceremony, Prof. Lieber made a keynote speech at the 2014 Sino-US Nano Forum.

Prof. Charles Lieber is an elected member of the National Academy of Sciences and the American Academy of Arts and Sciences, and one of the world’s leading scientists in nanoscience and nanotechnology. Prof. Lieber’s research has mainly focused on the growth, characterization and applications of nanomaterials and their broad range of applications in computer science, communications, optoelectronics, energy science, biology and medicine. His groundbreaking research has had a profound impact on the development of nanoscience and nanotechnology, and he was ranked the number one researcher in chemistry for the decade 2000-2010 by Thomson Reuters.

The Editor-in-Chief of Nano Research, Prof. Hongjie Dai, is the J.G. Jackson and C.J. Wood Professor of Chemistry at Stanford University, and an elected member of the American Academy of Arts and Sciences. In the Thomson Reuters list of the world’s top 100 chemists, based on the impact of their published research, Prof. Dai was ranked number seven, and the top Chinese chemist for the decade 2000-2010.

Another Editor-in-Chief of Nano Research, Prof. Yadong Li, is a professor at Tsinghua University and member of the Chinese Academy of Sciences. He has twice taken second place in the National Natural Science Award. As an academic leader and leading scientist, he has directed the innovation research group project funded by the National Natural Science Foundation and the Ministry of Science and Technology’s key nanoresearch project.

Springer Science+Business Media (www.springer.com) is a leading global scientific, technical and medical publisher, providing researchers in academia, scientific institutions and corporate R&D departments with quality content via innovative information products and services. Springer is also a trusted local-language publisher in Europe – especially in Germany and the Netherlands – primarily for physicians and professionals working in healthcare and road safety education. Springer published roughly 2,200 English-language journals and more than 8,400 new books in 2013, and the group is home to the world’s largest STM eBook collection, as well as the most comprehensive portfolio of open access journals. In 2013, Springer Science+Business Media generated sales of approximately EUR 943 million. The group employs more than 8,000 individuals across the globe.