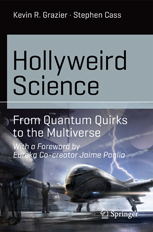 About the book Hollyweird Science

Journalists can request a review copy of the book Hollyweird Science.