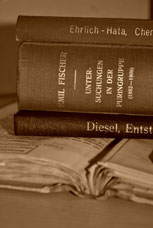 Springer kicked off 2014 by announcing two major accomplishments. The publisher completed its Springer Book Archives (SBA), a four-year project to digitize nearly every book it had published from the 1840s to 2004. Whereas the company originally anticipated that around 100,000 books would be part of this effort, by the time all was said and done more than 110,000 titles were included. Also, due in large part to the addition of those books in the SBA, SpringerLink (link.springer.com) – Springer’s online content platform – surpassed eight million documents for the first time.

Every title slated for inclusion in the pioneering Springer Book Archives had been digitized and made available for students, researchers and libraries by early 2014. The SBA project began in 2010 and the product was officially launched in January 2013 at the American Library Association’s Midwinter meeting. Rudolf Diesel, Werner von Siemens and Emil Fischer are counted among those authors whose works have become part of this precedent-setting endeavor.

“At Springer we take great pride in the quality and availability of all of our content,” remarked Syed Hasan, Springer’s President of Global Academic and Government Sales and Marketing. “But we are particularly proud of the completion of the Springer Book Archives. It was a long journey involving scores of Springer professionals and outside partners, but we couldn’t be happier with the final product.”

The addition of these important scientific titles to the rest of Springer’s offerings helped push the content available on SpringerLink to more than eight million documents. These resources include journal articles, book chapters, reference work entries and protocols. SpringerLink users can also download entire eBooks at one time, in addition to chapter by chapter – another new feature added in 2013. Passing this threshold means that more high-quality Springer content is available to researchers and students than ever before.

Springer Science+Business Media (www.springer.com) is a leading global scientific, technical and medical publisher, providing researchers in academia, scientific institutions and corporate R & D departments with quality content via innovative information products and services. Springer is also a trusted local-language publisher in Europe – especially in Germany and the Netherlands – primarily for physicians and professionals working in healthcare and road safety education. Springer published roughly 2,200 English-language journals and more than 8,000 new books in 2012, and the group is home to the world’s largest STM eBook collection, as well as the most comprehensive portfolio of open access journals. In 2012, Springer Science+Business Media S.A. generated sales of approximately EUR 981 million. The group employs more than 7,000 individuals across the globe.