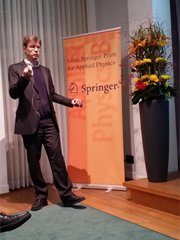 This year’s Julius Springer Prize for Applied Physics will be awarded to Prof. Mikhail Lukin (Harvard University), one of the world’s leading scientists in quantum optics and nanophotonics. His work on controlling matter down to the individual atom level and light waves down to the one-photon level has opened the doors to a wide range of new concepts in applied physics. The award, accompanied by US$ 5,000, will be presented at the Magnus-Haus in Berlin, Germany, on 21 October 2015 in conjunction with a public lecture given by the physicist.

Mikhail Lukin is a pioneer in the fast-growing field that uses quantum optical processes and devices for implementing the ideas of quantum information science. His work in both theoretical and experimental physics has resulted in new methods for controlling the propagation of light fields and for manipulating individual atoms by shaping light-matter interaction at the single-particle quantum level. His contributions range from ground-breaking work on quantum plasmonics to the realization of quantum optical switches. His pioneering work on coherent manipulation of electronic and nuclear spins based on atom-like impurities in solid-state led to fundamental building blocks of quantum information systems.

Mikhail Lukin received his early education from the Moscow Institute of Technology and Physics. He completed his Ph.D. degree at Texas A&M University in 1998. He was a post-doctoral fellow at the Institute for Theoretical Atomic and Molecular Physics at Harvard University from 1998 to 2001 before joining the faculty of the Harvard Physics Department in 2001 where he has been a professor of physics since 2004. He has co-authored over 300 technical papers and has received a number of distinguished awards.

Springer is part of Springer Nature, a leading global research, educational and professional publisher, home to an array of respected and trusted brands providing quality content through a range of innovative products and services. Springer Nature is the world’s largest academic book publisher, publisher of the world’s highest impact journals and a pioneer in the field of open research. The company numbers almost 13,000 staff in over 50 countries and has a turnover of approximately EUR 1.5 billion. Springer Nature was formed in 2015 through the merger of Nature Publishing Group, Palgrave Macmillan, Macmillan Education and Springer Science+Business Media.

About Applied Physics A

About Applied Physics B