Meet the white-spotted pufferfish: one of the “Top 10 New Species for 2015” 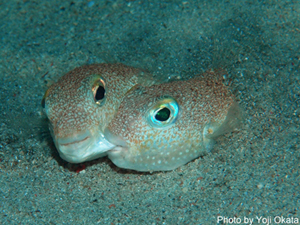 It is not every day that new species are found. So when one is in fact discovered, it is worth celebrating. Enter the white-spotted pufferfish (Torquigener albomaculosus). The discovery first appeared in 2014 in Ichthyological Research, the official journal of the Ichthyological Society of Japan, published by Springer. The fish has been selected by International Institute for Species Exploration (IISE) as one of the “Top 10 New Species for 2015.”

Since 1995, divers visiting the northern part of the Ryukyu Islands in Japan have observed the phenomenon of beautiful – but mysterious – circular patterns of sand on the sea bed. Until 2011, when underwater photographer Yoji Okata observed the white-spotted pufferfish creating the circles, the origins of these creations remained elusive. Finally, after being observed but not classified for several years, Keiichi Matsuura of the National Museum of Nature and Science in Tokyo, Japan, described and named the fish as a new species, uncovering its distinguishing characteristics once and for all. This new pufferfish is unique not only in its related groups, but also because of how it builds the geometric circles as spawning nests; no other fishes build such complicated places to procreate.

Dr. Hisashi Imamura, the Editor-in-Chief of the journal, stated, “I am very pleased to hear that Dr. Matsuura’s pufferfish, published in Ichthyological Research, was selected as one of the ‘Top 10 New Species for 2015.’ Dr. Matsuura’s meticulous attention to detail helped get his original article published quickly, which is a testament to the quality of the research, and the researcher.” 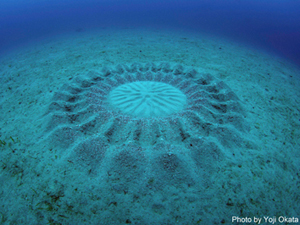 Aiko Hiraguchi, Springer’s Publishing Editor for Ichthyological Research remarked, “We knew that the discovery of this new species was not only important to ichthyology, but solved a long-running mystery that had confounded researchers. We were excited to feature the discovery in the journal, and we are delighted for the IISE’s selection of this fish for the top ten. It is an honor.”

Organized by the IISE, the top ten list is selected by an international committee of taxonomists and related experts. Those who make the coveted list come from among the tens of thousands of new species named during the previous year. The top 10 list is released each year on or about 23 May, the birthday of Carolus Linnaeus. Linnaeus is known as the “Father of Taxonomy,” and his work in the mid-eighteenth century was the beginning point for the modern naming and classification of plants and animals.

Ichthyological Research is an official journal of the Ichthyological Society of Japan, and primarily publishes research papers on original work, either descriptive or experimental, that advances the understanding of the diversity of fishes. Ichthyological Research strives to cover all aspects of fish biology, including taxonomy, systematics, evolution, biogeography, ecology, ethology, genetics, morphology, and physiology. The journal also publishes timely reviews and commentary on recent progress in active areas of research on fish biology.

Springer Science+Business Media (www.springer.com) is a leading global scientific, technical and medical publisher, providing researchers in academia, scientific institutions and corporate R&D departments with quality content via innovative information products and services. Springer is also a trusted local-language publisher in Europe – especially in Germany and the Netherlands – primarily for physicians and professionals working in healthcare and road safety education. Springer published roughly 2,400 English-language journals and more than 9,000 new books in 2014, and the group is home to the world’s largest STM eBook collection, as well as the most comprehensive portfolio of open access journals. In 2014, Springer Science+Business Media generated sales of approximately EUR 959 million. The group employs some 8,500 individuals across the globe.

About the Top Ten Species for 2015