Germany’s Role in the Euro Crisis

New book shows how Germany’s concepts of self, historical memory and institutional practices define its response to the euro crisis 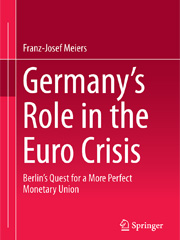 A new book by Franz-Josef Meiers analyses Germany’s role in the euro crisis. Based on the perception of Berlin as the emerging capital of the European Union, Meiers investigates three interrelated issues: Did the German policy approach of imposing austerity programs on countries in the middle of a deep recession contribute to the successful management of the euro crisis? Does Germany extend its way over its European partners by forcing them to surrender to the German diktat of fiscal “Disziplin” and economic efficiency? Is the stubborn insistence on rigid fiscal adjustment another ominous sign of the Berlin Republic moving away from the country’s traditional European vocation toward an imperial leadership role? The main argument of Germany’s Role in the Euro Crisis is that Germany’s role in and responses to the euro crisis can best be explained by different concepts of self, historical memory, and institutional practices.

Franz-Josef Meiers studied political science, history, and sociology at the University of Muenster (Germany), Juniata College, Huntingdon, PA (USA), and Duke University, Durham, NC (USA). He received his Bachelor of Arts degree from Juniata College in 1983 and his Dr. phil. and habilitation degrees from the University of Muenster in 1987 and 2005. Since 2007, he has been a Senior Lecturer at the Institute of Political Science of the University Erlangen-Nuernberg where he teaches undergraduate and graduate courses in international relations and the American political system.

About the book Germany's Role in the Euro Crisis

Journalists can request a review copy of the book. The author is available for interviews.