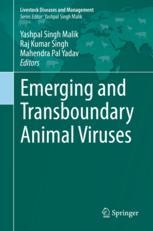 This book, which is the first volume of the book series-Livestock Diseases and Management, summarizes the prominence and implications of the emerging and transboundary animal viruses. Although the livestock plays an important role in the economy of many countries, the emerging and transboundary animal viral diseases possess a serious risk to the animal-agriculture sector and food security globally.

The book describes the precise and up-to-date information on animal viral diseases which have emerged in the recent past or are re-emerging due to various environmental factors and those which are not bounded in restricted national boundaries and attained the transboundary status. The chapters summarize the recent advancements in the molecular state-of-art tools towards the development of diagnostics, prophylactics, and therapeutics of these viruses.

It also explicitly describes the challenges imposed by the emerging and transboundary viral infections and our preparedness to counter them.
Show all
About the authors

Yashpal Singh Malik is presently working as “ICAR National Fellow” at the premier Veterinary Institute of the country—Indian Veterinary Research Institute (IVRI), Izatnagar, India. His major research achievements include contributions in viral disease epidemiology, virus-host interactions, microbial biodiversity, characterization, and diagnosis. He acquired advanced training in Molecular Virology from the University of Minnesota, Saint Paul, USA; Division of Virology, Ontario Research Institute, University of Ottawa, Ontario, Canada; and Wuhan Institute of Virology, Wuhan, China. He is a recipient of several prestigious national, state, and academy awards/honors including ICAR Jawaharlal Nehru Award (2001), Young Scientist Award of the Association of Microbiologists of India (2000), and Young Scientist Award from Uttarakhand Council of Science and Technology (2010). He is an active member of noted scientific and professional societies of international and national repute. He has been bestowed with several honors in the form of distinguished Associateships/Membership viz. Associateship of National Academy of Agricultural Sciences (2010); Membership—National Academy of Veterinary Sciences (2010); CSIR—Senior Research Fellowship (1997–2000); ICAR—Junior Research Fellowship (1995–1997); and Academic Merit Scholarship in bachelor’s degree (1990–1995). He is an elected Fellow of the Indian Virological Society, Indian Association of Veterinary Public Health Specialists, Indian Society for Veterinary Immunology and Biotechnology, and National Academy of Biological Sciences. Dr. Malik is a member of the International Committee on Taxonomy of Viruses (ICTV) on Birnaviridae and Picobirnaviridae study group and a managing committee member of the World Society for Virology. He has supervised 3 Ph.D. and 17 M.V.Sc. students. Over the years, he has developed several technologies and diagnostic kits and also has filed two national patents. He has authored 5 books, 25 book chapters, and published 2017 scientific research and review articles in peer-reviewed national/international journals of high impact factor. Dr. Malik has been the editor-in-chief of the Journal of Immunology Immunopathology and also edited a special issue of the Springer journal VirusDisease on “Enteric Viral Infections in Humans and Animals”; a special issue on “Emerging and Zoonotic Virus Challenges of Developing Nations” in Bentham’s The Open Virology Journal; a special issue on “Therapeutic Advances and Their Biomedical Perspectives” for the Journal of Current Drug Metabolism; and a special issue on “Biomedical Perspectives of Advances in Disease Diagnosis and Therapeutics (BPADDT)” edited for the Journal of Experimental Biology and Agricultural Sciences.

Raj Kumar Singh is currently the Director-cum-Vice-Chancellor of the ICAR-Indian Veterinary Research Institute, Izatnagar. Dr. Singh is a noted scientist of high repute with specialization in veterinary microbiology, biotechnology, molecular epidemiology, diagnostics, and vaccinology. He has served as the Head of the Division of Virology, Station-in-Charge at IVRI, Mukteswar campus, Uttarakhand, and later as Director of the NRC on Equines and VTCC, Hisar. Dr. Singh has 10 national patents (granted—2 and^8 live attenuated vaccines/vaccine candidates, and >26 diagnostic tests/assays/kits. He has authored 2 books, 23 book chapters, and published over 245 scientific research papers, 52 reviews, 15 lead papers, and 24 guest editorials/compendium chapters. Dr. Singh has supervised 8 doctoral and 11 master’s students. He received several prominent awards including prestigious ICAR Rafi Ahmad Kidwai Award and Team Research Award, DBT Tata Innovation Fellowship Award, Agriculture Research Leadership Award, FAO Fellowship for training at the University of California Davis, USA, and many others. He serves as the President of ISVIB and has several distinguished fellowships and life memberships of prestigious professional societies.

“The primary audience includes researchers, veterinary professionals, animal producers, administrators in regulatory agencies for infectious diseases, pharmaceutical industry professionals, biomedical experts, and graduate students and faculty interested in virology, epidemiology, public health, and zoonoses. These individuals will gain significant benefits from this book. … this book is a timely and essential addition in the areas of zoonosis, One Health, and virology. (Dongwan Yoo, Doody’s Book Reviews, May 15, 2020)