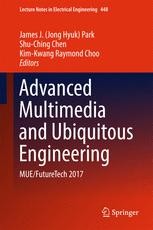 These two conferences provided an opportunity for academic and industrial professionals to discuss recent advances in the area of multimedia and ubiquitous environments including models and systems, new directions, and novel applications associated with the utilization and acceptance of ubiquitous computing devices and systems. The resulting papers address the latest technological innovations in the fields of digital convergence, multimedia convergence, intelligent applications, embedded systems, mobile and wireless communications, bio-inspired computing, grid and cloud computing, semantic web, user experience, HCI, and security and trust computing.

The book offers a valuable resource for a broad readership, including students, academic researchers, and professionals. Further, it provides an overview of current research and a “snapshot” for those new to the field.

James J. (Jong Hyuk) Park received his Ph.D. degree in Graduate School of Information Security from Korea University, Korea. From December, 2002 to July, 2007, Dr. Park had been a research scientist of R&D Institute, Hanwha S&C Co., Ltd., Korea. From September, 2007 to August, 2009, He had been a professor at the Department of Computer Science and Engineering, Kyungnam University, Korea. He is now a professor at the Department of Computer Science and Engineering, Seoul National University of Science and Technology (SeoulTech), Korea. Dr. Park has published about 100 research papers in international journals and conferences. He has been serving as chairs, program committee, or organizing committee chair for many international conferences and workshops. He is a president of the Future Technology Research Association International (FTRA) and Korea Information Technology Convergence Society (KITCS). He is editor-in-chief of Human-centric Computing and Information Sciences(HCIS) by Springer, International Journal of Information Technology, Communications and Convergence (IJITCC) by InderScience, and Journal of Convergence (JoC) by FTRA Publishing. He is Associate Editor / Editor of 14 international journals including 8 journals indexed by SCI(E). In addition, he has been serving as a Guest Editor for international journals by some publishers: Springer, Elsevier, John Wiley, Oxford Univ. press, Hindawi, Emerald, Inderscience. His research interests include security and digital forensics, Human-centric ubiquitous computing, context awareness, multimedia services, etc. He got the best paper awards from ISA-08 and ITCS-11 conferences and the outstanding leadership awards from IEEE HPCC-09, ICA3PP-10, IEE ISPA-11, and PDCAT-11. Dr. Park' s research interests include Digital Forensics, Security, Ubiquitous and Pervasive Computing, Context Awareness, Multimedia Service, etc. He is a member of the IEEE, IEEE Computer Society, KIPS, KICS, KIISC, KMMS, KDFS and KIIT.

Dr. Shu-Ching Chen is an Eminent Scholar Chaired Professor in the School of Computing and Information Sciences (SCIS), Florida International University (FIU), Miami. He has been a Full Professor since August 2009 in SCIS at FIU. Prior to that, he was an Assistant/Associate Professor in SCIS at FIU from 1999. He received his Ph.D. degree in Electrical and Computer Engineering in 1998, and Master's degrees in Computer Science, Electrical Engineering, and Civil Engineering in 1992, 1995, and 1996, respectively, all from Purdue University, West Lafayette, IN, USA.

He has been a General Chair and Program Chair for more than 60 conferences, symposiums, and workshops. He is the founding Editor-in-Chief of International Journal of Multimedia Data Engineering and Management, and Associate Editor/ Editorial Board of IEEE Trans. on Multimedia, IEEE Multimedia, IEEE Trans. on Human-Machine Systems, and other 13 journals. He served as the Chair of IEEE Computer Society Technical Committee on Multimedia Computing. He is Co-Chair of IEEE Systems, Man, and Cybernetics Society's Technical Committee on Knowledge Acquisition in Intelligent Systems. Dr. Chen also has been a guest editor for more than ten journal special issues. He was a member of three steering committees (including IEEE Transactions on Multimedia) and several panels for conferences and NSF. He also serves/served as a member of technical program committee for more than 360 professional meetings. Dr. Chen is also the Co-Founder of Bay Area Multimedia

His work has been at a strategic level, investigating current and predicted threats to ICT systems with a view to making evidence-based policy-relevant recommendations about protection and prevention. He has demonstrated the capacity to span a broad range of conceptual activities – from understanding technical details to identifying potential high-level threats – and to provide leadership in identifying priorities and opportunities and synthesising key issues and information in written and verbal fashion. He holds an Australian Government security clearance.

He regularly represents his employers to undertake high level consultations with Government and law enforcement agencies, academics and industry peak bodies in Australia and overseas (e.g. USA, Singapore, Hong Kong, Taiwan, Indonesia, and China). He has demonstrated that He maintains professionalism, integrity, ethical stewardship of resources in these high level consultations; and to collaborate with senior stakeholders in the public sector, private sector, think tanks and academia to cultivate ideas and deliver results. He has been an invited speaker for a number of events in Australia and overseas (e.g. 2011 United Nations Office on Drugs and Crime–International Telecommunication Union (UNODC-ITU) Asia-Pacific Regional Workshop on Fighting Cybercrime and 2011 (Ministerial-level) Korea-Australia-New Zealand (KANZ) Broadband Summit 2011) including delivering Keynote/Plenary Speeches at ECPAT Taiwan’s 2008 Conference on Criminal Problems and Intervention Strategy, 2010 International Conference on Applied Linguistics and 2011 Economic Crime Asia Conference, and Invited Lecture at the Bangladesh Institute of International and Strategic Studies. He was also invited to participate in the 2012 Coalition Parliamentarians Online Safety Working Group’s roundtable (established to consult with key technology, education and cyber-safety leaders, as well as other interested parties, to further develop its online safety policy in the areas of education, regulation and enforcement), and the 11th IISS Asia Security Summit, the 2012 Shangri-La Dialogue (all expenses paid for).

He is particularly aware that the time-specific nature of many political issues and the generally pressured work style in the government environment accentuate tight timeline, quality and other pressures. His awards and speaking invitations are testaments to the value of his work and potential to undertake work of significant international impact.