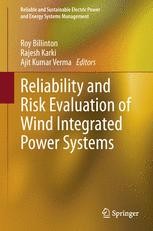 The world is witnessing a rapid growth in wind and other renewable based electricity generation due to environmental concerns associated with electricity generation from the conventional sources. Wind power behaves quite differently than conventional electric power generating units due to its intermittent and diffuse nature.  System planners and operators face the variability and uncertainty of wind power availability, and therefore, encounter considerable challenges in making decisions to maintain the adequacy and security of wind integrated power systems. This volume intends to bring out the original research work of researchers from academia and industry in understanding, quantifying and managing the risks associated with the uncertainty in wind variability in order to plan and operate a modern power system integrated with a significant proportion of wind power generation with an acceptable level of reliability. Accurate modeling of wind power variability and proper incorporation of the models in reliability and risk evaluation is very important for the planning and operation of electric power systems, and will play a crucial role in defining the requirement of various types of resources and services, such as storage and ancillary services in power systems.

Dr Roy Billinton received the B.Sc. and M.Sc. degrees from the University of Manitoba, Winnipeg, MB, Canada, and the Ph.D. and D.Sc. degrees in electrical engineering from the University of Saskatchewan, Saskatoon, SK, Canada. He was with the System Planning and Production Divisions, Manitoba Hydro. In 1964, he joined the University of Saskatchewan, where he served as the Head of the Electrical Engineering Department, Associate Dean for Graduate Studies, Research and Extension, and the Acting Dean of Engineering, and is currently a Professor Emeritus in the Department of Electrical Engineering. He has authored or coauthored eight books and more than 940 papers on power system reliability evaluation, economic system operation, and power system analysis. Dr. Billinton is a Fellow of the Engineering Institute of Canada, the Canadian Academy of Engineering, the Royal Society of Canada, a Foreign Associate of the United States National Academy of Engineering, and a Professional Engineer in the Province of Saskatchewan, Canada. The IEEE-PES honored Dr Billinton by initiating the Roy Billinton Power System Reliability Award in 2010.

Dr Rajesh Karki obtained his B.E. degree in electrical engineering from the Regional Engineering College (renamed National Institute of Technology), West Bengal, India in 1991, and MSc and PhD degress in electrical power engineering in 1997 and 2000 respectively from the University of Saskatchewan, Canada. He worked for academic institutions and different industries in Nepal between 1991 and 1995. He worked for GE Industrial Systems, Peterborough, ON, Canada during 2000-2002. He joined the University of Saskatchewan, Canada as an Assistant Professor in 2002, where he currently works as an Associate Professor. He chaired the Power Systems Research Group at the University of Saskatchewan during 2005-2012. His research interests include power system reliability and planning, and reliability modeling and analysis of renewable energy systems. He has served in various capacities in international conferences held in Canada and abroad. He has published over 70 papers in reputable international journals and peer reviewed conferences. He has completed several consulting projects on system planning and reliability for Canadian electric utilities. Dr Karki is a Senior Member of the IEEE, and a Professional Engineer in the Province of Saskatchewan, Canada.

Dr Ajit Verma obtained B.Tech(Electrical Engineering) and PhD(Reliability Engineering) from Indian Institute of Technology Kharagpur, India in 1984 and 1988 respectively. He joined Indian Institute of Technology Bombay in 1988 where he holds the position of Professor of Electrical Engineering.  He is currently working as Professor of Technical Safety at University College Stord/Haugesund, Norway. He has supervised/co-supervised 28 PhDs and 88 Masters thesis in the area of Software Reliability, Reliable Computing, Power Systems Reliability (PSR), Reliability Centered Maintenance (RCM) and Probabilistic Safety/Risk Assessment (PSA). He has over 195 publications in various journals and conferences. He is a senior member of IEEE and a life fellow of IETE. He is the Editor-in-Chief of International Journal of Systems Assurance Engineering and Management (IJSAEM) published by Springer, as well as a member of the  Advisory Committee for the journal OPSEARCH also published by Springer. He has served as a Guest Editor of many international journals including IEEE Transactions on Reliability March, 2010. He has been Conference Chairman of various International Conferences and symposia.