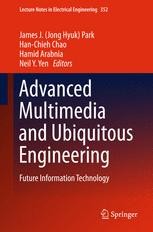 Representing the combined proceedings of the 9th International Conference on Multimedia and Ubiquitous Engineering (MUE-15) and the 10th International Conference on Future Information Technology (Future Tech 2015), this book aims to provide a complete coverage of the areas outlined and to bring together researchers from academic and industry and other practitioners to share their research ideas, challenges and solutions.

Professor James J. (Jong Hyuk) Park received his Ph.D. degree in Graduate School of Information Security from Korea University, Korea. From December, 2002 to July, 2007, Dr. Park had been a research scientist of R&D Institute, Hanwha S&C Co., Ltd., Korea. From September, 2007 to August, 2009, He had been a professor at the Department of Computer Science and Engineering, Kyungnam University, Korea. He is now a professor at the Department of Computer Science and Engineering, Seoul National University of Science and Technology (SeoulTech), Korea. Dr. Park has published about 100 research papers in international journals and conferences. He has been serving as chairs, program committee, or organizing committee chair for many international conferences and workshops. He is a president of the Future Technology Research Association International (FTRA) and Korea Information Technology Convergence Society (KITCS). He is editor-in-chief of Human-centric Computing and Information Sciences(HCIS) by Springer, International Journal of Information Technology, Communications and Convergence (IJITCC) by InderScience, and Journal of Convergence (JoC) by FTRA Publishing. He is Associate Editor / Editor of 14 international journals including 8 journals indexed by SCI(E). In addition, he has been serving as a Guest Editor for international journals by some publishers: Springer, Elsevier, John Wiley, Oxford Univ. press, Hindawi, Emerald, Inderscience. His research interests include security and digital forensics, Human-centric ubiquitous computing, context awareness, multimedia services, etc. He got the best paper awards from ISA-08 and ITCS-11 conferences and the outstanding leadership awards from IEEE HPCC-09, ICA3PP-10, IEE ISPA-11, and PDCAT-11. Dr. Park' s research interests include Digital Forensics, Security, Ubiquitous and Pervasive Computing, Context Awareness, Multimedia Service, etc. He is a member of the IEEE, IEEE Computer Society, KIPS, KICS, KIISC, KMMS, KDFS and KIIT.

Professor Han-Chieh Chao is a joint appointed Full Professor of the Department of Electronic Engineering and Institute of Computer Science & Information Engineering. He also serves as the Dean of the College of Electrical Engineering & Computer Science for National Ilan University, I-Lan, Taiwan, R.O.C. He has been appointed as the Director of the Computer Center for Ministry of Education on September 2009 as well. His research interests include High Speed Networks, Wireless Networks, IPv6 based Networks, Digital Creative Arts and Digital Divide. He received his MS and Ph.D. degrees in Electrical Engineering from Purdue University in 1989 and 1993 respectively. Dr. Chao is also serving as an IPv6 Steering Committee member and co-chair of R&D division of the NICI (National Information and Communication Initiative, a ministry level government agency which aims to integrate domestic IT and Telecom projects of Taiwan), Co-chair of the Technical Area for IPv6 Forum Taiwan, the Editor-in-Chief of the Journal of Internet Technology, Journal of Internet Protocol Technology and International Journal of Ad Hoc and Ubiquitous Computing. Dr. Chao has served as the guest editors for Mobile Networking and Applications (ACM MONET), IEEE JSAC, IEEE Communications Magazine, Computer Communications, IEE Proceedings Communications, the Computer Journal, Telecommunication Systems, Wireless Personal Communications, and Wireless Communications & Mobile Computing. Dr. Chao is an IEEE senior member and a Fellow of IET (IEE). He is a Chartered Fellow of British Computer Society.

Professor Hamid R. Arabnia received a Ph.D. degree in Computer Science from the University of Kent (Canterbury, England) in 1987. Arabnia is currently a Professor of Computer Science at University of Georgia (Georgia, USA), where he has been since October 1987. His research interests include Parallel and distributed processing techniques and algorithms, supercomputing, Big Data Analytics and applications in medical imaging, knowledge engineering, security and surveillance systems and other computational intensive problems. Most recently, he has been studying ways to promote legislation that would prevent cyber-stalking, cyber-harassment, and cyber-bullying. Dr. Arabnia is Editor-in-Chief of The Journal of Supercomputing (one of the oldest journals in Computer Science) published by Springer and has been Associate Editor of IEEE Transactions on Information Technology in Biomedicine (2008-2011). He is also on the editorial and advisory boards of 32 other journals. He is the book series editor-in-chief of “Transactions of Computational Science and Computational Intelligence” (Springer) and editor-in-chief of the book series entitled “Emerging Trends in Computer Science and Applied Computing" (Elsevier). Dr. Arabnia has received a number of awards; most recently (2007), he received an "Outstanding Achievement Award in Recognition of His Leadership and Outstanding Research Contributions to the Field of Supercomputing". This award was presented to him at Harvard University Medical School (signatories: Lawrence O. Hall, President of IEEE/SMC; Zhi-Pei Liang, Vice President of IEEE/EMB; Jack. Y. Yang, General Chair of IEEE BIBE and Harvard University; Mary Qu Yang, Chair of Steering Committee, IEEE BIBE and NIH); Distinguished Leadership and Visionary Award. Presented by FTRA (Future Technology Research Association), presented by Steering Committee of CSA-13 International Conference; Distinguished Research Award for his Outstanding Contributions to Adaptable Communication Systems, presented by ACM SIGAPP IMCOM Co-Chairs, 2014. Dr. Arabnia is an elected Fellow, International Society of Intelligent Biological Medicine (ISIBM); he has served on the Advisory Board of IEEE Technical Committee on Scalable Computing (TCSC, 2006-2012).
Dr. Arabnia has published extensively in journals and refereed conference proceedings. He has about 400 publications (about 160 in journals and proceedings and 240 edited books) in his area of research. He has been a PI/Co-PI on $7,139,525 externally funded projects/initiatives and on $103,453 internally funded projects (correct as of January 2009). He has also contributed projects for justification for equipment purchase (grant proposals worth over $4 Million - awarded). During his tenure as Graduate Coordinator/Director of Computer Science (2002-2009), Dr. Arabnia secured the largest level of funding in the history of the department for supporting the research and education of graduate students (PhD, MS).

Professor Neil Y. Yen received doctorates in Human Sciences at Waseda University, Japan, and in Engineering at Tamkang University, Taiwan in 2012. His doctorate in Waseda University was funded by the JSPS (Japan Society for the Promotion of Science) under RONPAKU program. He joins The University of Aizu, Japan as an associate professor since April 2012. Dr. Yen has been engaged extensively in an interdisciplinary field of research, where the themes are in the scope of Big Data Science, Computational Intelligence, and Human-centered Computing. Dr. Yen has been actively involved in the research community by serving as guest editors, associate editor and reviewer for international referred journals, and as organizer/chair of ACM/IEEE-sponsored conferences, workshops and special sessions. He is now a member of IEEE Computer Society, IEEE System, Man, and Cybernetics Society, and technical committee of awareness computing (IEEE SMCS).