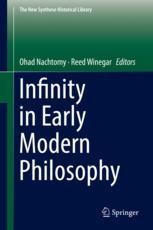 This volume contains essays that examine infinity in early modern philosophy. The essays not only consider the ways that key figures viewed the concept. They also detail how these different beliefs about infinity influenced major philosophical systems throughout the era. These domains include mathematics, metaphysics, epistemology, ethics, science, and theology.

Coverage begins with an introduction that outlines the overall importance of infinity to early modern philosophy. It then moves from a general background of infinity (before early modern thought) up through Kant. Readers will learn about the place of infinity in the writings of key early modern thinkers. The contributors profile the work of Descartes, Spinoza, Leibniz, and Kant.

Debates over infinity significantly influenced philosophical discussion regarding the human condition and the extent and limits of human knowledge. Questions about the infinity of space, for instance, helped lead to the introduction of a heliocentric solar system as well as the discovery of calculus. This volume offers readers an insightful look into all this and more. It provides a broad perspective that will help advance the present state of knowledge on this important but often overlooked topic.

Reed Winegar’s research focuses on early modern philosophy, Kant, and German Idealism. He has published papers with the Archiv für Geschichte der Philosophie, British Journal for the History of Philosophy, European Journal of Philosophy, Hegel Bulletin, Kantian Review, and Journal of Scottish Philosophy. He also has contributed to the volumes Kant and the Scottish Enlightenment (Routledge) and Freedom and Nature (de Gruyter). In 2015-16 he was a VolkswagenStiftung/Mellon Postdoctoral Fellow in the Humanities at the Freie Universität Berlin, and in summer 2018 he was a guest professor at the Humboldt-Universität zu Berlin.