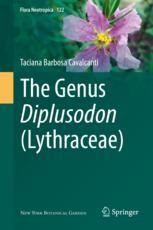 This volume is a monograph of the genus Diplusodon (Lythraceae), written by the world authority on this plant group. Diplusodon is a monophyletic genus of shrubs and subshrubs, with showy, 6-merous, actinomorphic flowers, and floral tubes on which the sepals alternate with conspicuous epicalyx segments. The capsular fruit contains winged seeds and, uniquely for the family, is divided by a bipartite placenta with two semi-lunate septa. Diplusodon is the second largest genus in the Lythraceae and occurs mostly in the Cerrado Biome, the floristically diverse savannah that covers more than two million km2 of the Central Brazilian Plateau, extending west into Bolivia, south to Paraguay and east to the Caatinga. A total of 104 species and eight varieties are recognized in the genus, for which 46 lectotypes, one neotype, one new status and one new combination are designated, nine new species are described, and 15 taxa are placed in synonymy. New information on floral and vegetative morphology, pollen, cytology, chemistry, floral biology, and habitat are provided for the genus. In addition, keys to the species are accompanied by descriptions, illustrations, distribution maps, and assignment of conservation status.