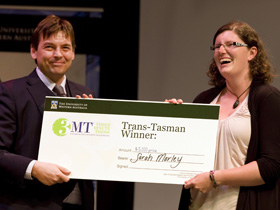 Once again, Springer, part of the newly formed publishing group Springer Nature, is sponsoring the Trans-Tasman Three Minute Thesis (3MT®) competition. This high-profile event challenges doctoral students to condense and explain years of research to a non-specialist audience in a matter of minutes. Doctoral candidates from 50 universities across the Asia Pacific will take part in the contest on 2 October 2015 at the University of Queensland, Australia.

3MT® is an academic communication competition that challenges higher degree students to explain their research to a general audience in just three minutes. Developed by The University of Queensland in 2008, the exercise cultivates students’ academic, presentation and research communication skills. It has spread internationally with competitions now being held in at least 200 universities across more than 18 countries worldwide.

“The competition provides Springer with a way of encouraging early career researchers to develop an ability to communicate their work to non-scientists,” commented James Mercer, Springer’s Sales Director for Southeast Asia and Oceania. “As the major sponsor of the 2015 Trans-Tasman 3MT®, Springer is delighted to support these young researchers to hone their skills. This exercise could have a tremendous impact on their career trajectory.”

UQ Graduate School Dean Professor Alastair McEwan said, “The 3MT® is designed to develop skills that will give students an important career advantage once they complete their studies. It is a reality that many PhD students will need to communicate their ideas and results to people who may not necessarily have expertise in their field. 3MT® develops the ability of students to communicate the significance and outcomes of their project in a short space of time. We appreciate Springer’s sponsorship of this exciting competition.”

The winner of the 2015 Trans-Tasman 3MT® competition will receive a $5,000 research travel grant, as well as a funded trip to compete in the Falling Walls Lab Final and Conference in Berlin.

Springer Nature (www.springernature.com) is a major new force in scientific, scholarly, professional and educational publishing. By using its combined expertise, scale and the reach of our brands, the company aims to grow and innovate in order to better serve academic researchers, students, teachers, institutions, professionals and the wider public, by helping them discover more. Springer Nature was created through the combination of Nature Publishing Group, Palgrave Macmillan, Macmillan Education and Springer Science+Business Media in May 2015. This strategic merger brought together these dynamic publishing houses with more than 150 years of history behind them, as well as complementary geographic footprints and brand portfolios, a track record of creativity and innovation, and a shared vision to advance knowledge and learning around the world. The company numbers almost 13,000 staff in over 50 countries and has a turnover of EURO 1.5 billion.