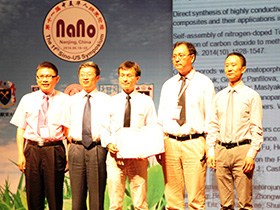 Peidong Yang has received the third Tsinghua University Press-Springer Nano Research Award. Peidong Yang is the S.K. and Angela Chan Distinguished Professor of Energy and Professor of Chemistry at the University of California, Berkeley, and a faculty scientist at Lawrence Berkeley National Laboratory. Professors Hongjie Dai and Yadong Li (Editors-in-Chief of the journal Nano Research) jointly presented the award plaque to Peidong Yang, while Dr. Yong Li, Chairman of the Board of Tsinghua University Press (TUP), and Dr. Lu Ye, Editorial Director of Physical Science and Engineering at Springer Nature China, presented the award certificate. The award is accompanied by a cash prize of US $10,000. The award ceremony was held during the 2016 Sino-US Symposium on Nanoscale Science and Technology on June 20, in Nanjing, China.

Peidong Yang was selected for the award in recognition of his extraordinary contributions to nanowire-related science and technology in the field of artificial photosynthesis. Yang invented the first fully integrated system for the production of value-added chemicals directly and solely from CO2, H2O and sunlight, which is widely considered one of the major breakthroughs in the field of artificial photosynthesis. He presented an invited keynote speech at the Sino-US Symposium on Nanoscale Science and Technology with the title “CO2+ H2O + Sunlight → Chemical Fuels + O2”.

Professors Hongjie Dai and Peidong Yang were recently elected as new members of the National Academy of Sciences (USA) in recognition of their distinguished and continuing achievements in original research.

Springer Nature is a leading global research, educational and professional publisher, home to an array of respected and trusted brands providing quality content through a range of innovative products and services. Springer Nature is the world’s largest academic book publisher, publisher of the world’s most influential journals and a pioneer in the field of open research. The company numbers almost 13,000 staff in over 50 countries. Springer Nature was formed in 2015 through the merger of Nature Publishing Group, Palgrave Macmillan, Macmillan Education and Springer Science+Business Media. Visit www.springernature.com and follow @SpringerNature.