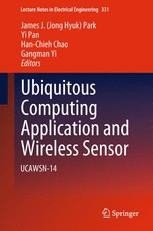 IT changes everyday’s life, especially in education and medicine. The goal of ITME 2014 is to further explore the theoretical and practical issues of Ubiquitous Computing Application and Wireless Sensor Network. It also aims to foster new ideas and collaboration between researchers and practitioners. The organizing committee is soliciting unpublished papers for the main conference and its special tracks.

Professor James J. (Jong Hyuk) Park received his Ph.D. degree in Graduate School of Information Security from Korea University, Korea. From December, 2002 to July, 2007, Dr. Park had been a research scientist of R&D Institute, Hanwha S&C Co., Ltd., Korea. From September, 2007 to August, 2009, He had been a professor at the Department of Computer Science and Engineering, Kyungnam University, Korea. He is now a professor at the Department of Computer Science and Engineering, Seoul National University of Science and Technology (SeoulTech), Korea. Dr. Park has published about 100 research papers in international journals and conferences. He has been serving as chairs, program committee, or organizing committee chair for many international conferences and workshops. He is a president of the Future Technology Research Association International (FTRA) and Korea Information Technology Convergence Society (KITCS). He is editor-in-chief of Human-centric Computing and Information Sciences(HCIS) by Springer, International Journal of Information Technology, Communications and Convergence (IJITCC) by InderScience, and Journal of Convergence (JoC) by FTRA Publishing. He is Associate Editor / Editor of 14 international journals including 8 journals indexed by SCI(E). In addition, he has been serving as a Guest Editor for international journals by some publishers: Springer, Elsevier, John Wiley, Oxford Univ. press, Hindawi, Emerald, Inderscience. His research interests include security and digital forensics, Human-centric ubiquitous computing, context awareness, multimedia services, etc. He got the best paper awards from ISA-08 and ITCS-11 conferences and the outstanding leadership awards from IEEE HPCC-09, ICA3PP-10, IEE ISPA-11, and PDCAT-11. Dr. Park' s research interests include Digital Forensics, Security, Ubiquitous and Pervasive Computing, Context Awareness, Multimedia Service, etc. He is a member of the IEEE, IEEE Computer Society, KIPS, KICS, KIISC, KMMS, KDFS and KIIT.

Professor Yi Pan was born in Jiangsu, China. He entered Tsinghua University in March 1978 with the highest college entrance examination score among all 1977 high school graduates in Jiangsu Province. Dr. Pan is a Distinguished University Professor and Chair of the Department of Computer Science and Professor of the Department of Computer Information Systems at Georgia State University. Dr. Pan received his B.Eng. and M.Eng. degrees in computer engineering from Tsinghua University, China, in 1982 and 1984, respectively, and his Ph.D. degree in computer science from the University of Pittsburgh, USA, in 1991. Dr. Pan's research interests include parallel and cloud computing, wireless networks, and bioinformatics. Dr. Pan has published more than 150 journal papers with over 50 papers published in various IEEE/ACM journals. In addition, he has published over 150 conference papers and edited/authored 39 books. He has received many awards from organizations such as IEEE, NSF, AFOSR, JSPS, IBM, ISIBM, IISF and Mellon Foundation. Dr. Pan has served as an editor-in-chief or editorial board member for 15 journals including 7 IEEE Transactions and a guest editor for 10 special issues for 9 journals including 2 IEEE Transactions. He has organized numerous international conferences and workshops and has delivered over 20 keynote speeches at international conferences. Dr. Pan is a "Great Master Face-to-Face" Series Speaker (2012), an IEEE Distinguished Speaker (2000-2002), a Yamacraw Distinguished Speaker (2002), a Shell Oil Colloquium Speaker (2002), and a senior member of IEEE. He is listed in Men of Achievement, Who's Who in Midwest, Who's Who in America, Who's Who in American Education, Who's Who in Computational Science and Engineering, and Who's Who of Asian Americans.

Professor Han-Chieh Chao is a joint appointed Full Professor of the Department of Computer Science & Information Engineering and Electronic Engineering of National Ilan University, I-Lan, Taiwan (NIU). He is serving as the President since August 2010 for NIU as well. He was the Director of the Computer Center for Ministry of Education Taiwan from September 2008 to July 2010. His research interests include High Speed Networks, Wireless Networks, IPv6 based Networks, Digital Creative Arts, e-Government and Digital Divide. He received his MS and Ph.D. degrees in Electrical Engineering from Purdue University in 1989 and 1993 respectively. He has authored or co-authored 4 books and has published about 400 refereed professional research papers. He has completed more than 100 MSEE thesis students and 4 PhD students. Dr. Chao has been invited frequently to give talks at national and international conferences and research organizations. Dr. Chao is the Editor-in-Chief for IET Networks, Journal of Internet Technology, International Journal of Internet Protocol Technology, and International Journal of Ad Hoc and Ubiquitous Computing. Dr. Chao has served as the guest editors for Mobile Networking and Applications (ACM MONET), IEEE JSAC, IEEE Communications Magazine, IEEE Systems Journal, Computer Communications, IEE Proceedings Communications, the Computer Journal, Telecommunication Systems, Wireless Personal Communications, and Wireless Communications & Mobile Computing. Dr. Chao is an IEEE senior member and a Fellow of IET (IEE).

Professor Gangman Yi received his master’s degree in Computer Sciences at Texas A&M University, USA in 2007, and doctorate in Computer Sciences at Texas A&M University, USA in 2011. In May 2011, he joined System S/W group in Samsung Electronics, Suwon, Korea. He joined the Department of Computer Science & Engineering, Gangneung-Wonju National University, Korea, since March 2012. Dr. Yi has been researched in an interdisciplinary field of researches. His research focuses especially on the development of computational methods to improve understanding of biological systems and its big data. Dr. Yi actively serves as a managing editor and reviewer for international journals, and chair of international conferences and workshops.