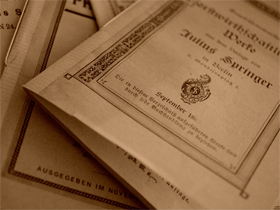 On 10 May 1842 (his 25th birthday), Julius Springer founded his bookstore and publishing house in Berlin, laying the foundation for today’s company.

After 180 dynamic years the name Springer stands for a globally active publisher dedicated to the advancement of science, putting its authors and editors at the heart of the company’s publishing activities.