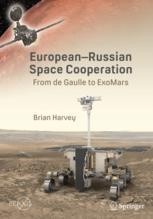 From De Gaulle to ExoMars

The story of European-Russian collaboration in space is little known and its importance all too often understated. Because France was the principal interlocutor between these nations, such cooperation did not receive the attention it deserved in English-language literature. This book rectifies that history, showing how Russia and Europe forged a successful partnership that has continued to the present day.

Space writer Brian Harvey provides an in-depth picture of how this European-Russian relationship evolved and what factors—scientific, political and industrial—propelled it over the decades. The history begins in the cold war period with the first collaborative ventures between the Soviet Union and European countries, primarily France, followed later by Germany and other European countries. Next, the chapters turn to the missions when European astronauts flew to Russian space stations, the Soyuz rocket made a new home in European territory in the South American jungle and science missions were flown to study deep space. Their climax is the joint mission to explore Mars, called ExoMars, which has already sent a mission to Mars.

Through this close examination of these European-Russian efforts, readers will appreciate an altogether new perspective on the history of space exploration, no longer defined by   competition, but rather by collaboration and cooperation.

Brian Harvey has been a writer and broadcaster on spaceflight since the early 1970s. His articles have appeared in Spaceflight, Quest, Orbit, Astronomy & Space, Astronomy Now,  Space Quarterly, Go Taikonauts! and ROOM.  He has contributed to radio programs on RTE, BBC (Radio 4, Radio 5, World Service), Voice of America, Future tense (Australia) and to television and film programs for the Canadian Broadcasting Corporation, China Television, Discovery Channel and Danish TV. His first book was a history of the Soviet space program (Ellis Horwood, 1988), with three subsequent editions; followed by histories of Soviet lunar exploration, Soviet planetary exploration and Russian space science; as well as histories of the European, Japanese and Indian space programs and the American Explorer satellites (all published by Praxis, later Praxis/Springer).  His history of the Chinese space program has been published in four editions, most recently as China in space - the great leap forward (2019).  He contributed chapters to Space Sleuths (Praxis, 2012) and a book on Yuri Galperin, published by the Academy of Sciences in Moscow (2012).