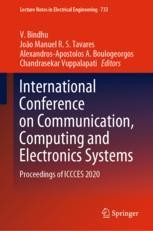 V. Bindhu received the B.E. degree in Electronics and Communication Engineering from Bharathiar University, Coimbatore, in 2002, M.E. degree in Applied Electronics from Anna University, Chennai, in 2007, and Ph.D. degree from Anna University, Chennai, in 2014. She has 10 years of teaching experience and 5 years of research experience. Currently, she is Professor at PPG Institute of Technology, Coimbatore. Her area of interest includes signal processing and VLSI design.

Alexandros-Apostolos A. Boulogeorgos was born in Trikala, Greece, in 1988. He received the Electrical and Computer Engineering (ECE) diploma degree and Ph.D. degree in Wireless Communications from the Aristotle University of Thessaloniki (AUTh) in 2012 and 2016, respectively. From November 2012, he has been a member of the wireless communications system group (WCSG) of AUTh, while, from November 2017, he has joined the Department of Digital Systems, University of Piraeus. He also serves as an adjunct professor in the department of ECE in the University of Western Macedonia and as a visiting lecturer at the University of Thessaly. Finally, he is a Senior Member of the IEEE as well as the Technical Chamber of Greece, and serves as editor in IEEE Communications Letters.