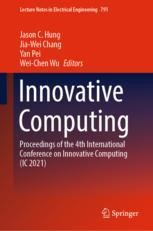 Proceedings of the 4th International Conference on Innovative Computing (IC 2021)

This book comprises select proceedings of the 4th International Conference on Innovative Computing (IC 2021) focusing on cutting-edge research carried out in the areas of information technology, science, and engineering. Some of the themes covered in this book are cloud communications and networking, high performance computing, architecture for secure and interactive IoT, satellite communication, wearable network and system, infrastructure management, etc. The essays are written by leading international experts, making it a valuable resource for researchers and practicing engineers alike.

Dr. Jason C. Hung is Associate Professor of Department of Computer Science and Information Engineering at National Taichung University of Science and Technology, Taiwan, ROC. His research interests include multimedia computing and networking, e-learning, Web service, and anticipatory computing. Dr. Hung received his B.S. and M.S. degrees in Computer Science and Information Engineering from Tamkang University, in 1996 and 1998, respectively. He also received his Ph.D. in Computer Science and Information Engineering from Tamkang University in 2001. Dr. Hung has published over 140 papers and book chapters, as well as participated in many international academic activities, including the organization of many international conferences. He is Founder of International Conference on Frontier Computing. In 2013, He served as Hon Treasurer of IET Taipei LN. In April of 2014, he was elected as Fellow of the Institution of Engineering and Technology (FIET). He was elected as Vice Chair of IET Taipei LN in Nov. 2014. From June 2015, He is Editor-in-Chief of International Journal of Cognitive Performance Support.

Dr. Jia-Wei Chang is Assistant Professor in Department of Computer Science and Information Engineering at National Taichung University of Science and Technology. Since January 2019, he is Young Professionals Chair of the Institution of Engineering and Technology (IET) - Taipei Network. Since 2017, he is Consultant of NEXCOM Industry 4.0 Innovation Center. During February to July 2018, he was Adjunct Assistant Professor in Department of Engineering Science at National Cheng Kung University. He was Data Scientist and Project Manager at IoT BU, Nexcom during 2016-2017. He received the Ph.D. degree from Department of Engineering Science, National Cheng Kung University in 2017. His research interests include natural language processing, Internet of things, artificial intelligence, data mining, and e-learning technologies.

Dr. Yan Pei was born in Shenyang, China. He obtained Doctor of Engineering at Kyushu University, Fukuoka, Japan. He received the B.Eng. and M.Eng. degrees from Northeastern University, Shenyang, China. He was Software Engineer and Software Projector Manager in Chinese and German IT industries for several years before entering academic society. He is currently working at the University of Aizu as Associate Professor. His research interests include evolutionary computation, machine learning, and software engineering. He serves as Chairs and Organization Committee Members in many international conferences sponsored by IEEE, ACM, and other international associations. He is also serving as Editors in many international journals. He is Member of IEEE SMC, IEEE CIS and Japanese society for evolutionary computation.

Dr. Wei-Chen Wu was born in Taipei, Taiwan R.O.C. in 1974. He is Assistant Professor in the Department of Finance at the Feng Chia University. He received his Ph.D. degree in Information Management from National Central University in 2016. From 2008–2016, he is also Assistant Professor and Director of the Computer Center at Hsin Sheng College of Medical Care and Management. His teaching interests lie in the area of programming languages, ranging from theory to design to implementation and his current research interests include blockchain technology, fintech cybersecurity, network security, and deep learning. Wei-Chen Wu has collaborated actively with researchers in several other disciplines of computer science. He has served on many conference and workshop program committees and served as the Workshop Chair for Frontier Computing Conference, FC2020.