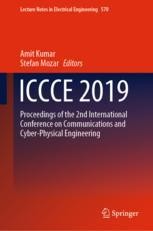 This book is a collection research papers and articles from the 2nd International Conference on Communications and Cyber-Physical Engineering (ICCCE – 2019), held in Pune, India in Feb 2019. Discussing the latest developments in voice and data communication engineering, cyber-physical systems, network science, communication software, image- and multimedia processing research and applications, as well as communication technologies and other related technologies, it includes contributions from both academia and industry.

Amit Kumar, is a Forensic Scientist, Entrepreneur, Engineer, Bioinformatician and an IEEE Volunteer. In 2005, he founded the first private DNA testing company, BioAxis DNA Research Centre (P) Ltd, in Hyderabad, India. He has been involved in training over 1000 crime investigation officers and provided analytical services in more than 750 criminal and non-criminal cases. His group also works extensively on biomedical engineering, genetic predisposition risk studies of cancers and has helped many patients in the battle against cancer. Amit was member of the IEEE Strategy Development and Environmental Assessment committee (SDEA) of IEEE MGA. He is senior member of IEEE and has been an active IEEE volunteer. He organized a number of IEEE conferences, conference leadership programs, entrepreneurship development workshops, and innovation and Internship related events. Currently, he is also a Visiting Professor at SJB Research Foundation and Vice Chairman of IEEE India Council and IEEE Hyderabad Section.

Stefan Mozar obtained his engineering degrees from the University of New South Wales in Sydney, Australia, and his MBA from the University of Technology Sydney. He is a Fellow of the IEEE, and of the Institution of Engineers, Australia. He is a chartered professional engineer and has extensive experience in industry and academia. He has held senior leadership roles in various technology companies and has taught at a number of Australian, Asian, and British Universities. His work has resulted in inventions, patents, and publications. He has lived and worked in Australia, China, Hong Kong, Singapore and worked on projects in India, Indonesia, Malaysia, Thailand, and Vietnam and has made contributions to the advancement of the IEEE in R-10 and globally. He is the editor of the 6th edition of the McGraw-Hill Electronics Engineering Handbook, released in 2017.