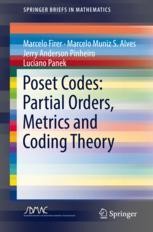 This book offers an organized and systematic approach to poset metrics and codes. Poset metrics, or metrics on a vector field determined by a partial order over a finite set, were first introduced in the mid-1990s by the mathematicians Richard A. Brualdi, Janine S. Graves and K. Mark Lawrence, and to date the relevant knowledge on this subject was spread over more than two hundred research papers. Poset metrics generalizes both the standard Hamming metric – the most important metric used in the context of coding theory – and the Niederreiter-Rosenbloom-Tsfasman metric, which is an ultrametric. Conceived to be as self-contained as possible, the book starts from basic concepts of coding theory and advances towards coding theory for poset metrics and generalizations. Each chapter includes a survey of the topic presented and a list of exercises, drawn in part from recently proven results. This work will appeal to researchers and graduate students alike, particularly those in the fields of Mathematics, Electrical Engineering and Computer Sciences, with an interest in discrete geometry and coding theory.

Marcelo Firer holds Bachelor’s (1989) and Master’s (1991) degrees in Mathematics from the University of Campinas (Unicamp), Brazil, and received his PhD in Mathematics from the Hebrew University of Jerusalem (1997), Israel, under the supervision of Dr. Ilya Rips. He is currently a researcher at the Department of Mathematics at Unicamp, where he has worked since 1999. During this period his research focus has shifted from differential geometry and symmetric spaces to discrete geometrical problems in the context of Coding Theory.

Marcelo Muniz S. Alves completed his Bachelor’s (1996), Master’s (1998) and PhD (2002) studies in Mathematics at the University of Campinas (Unicamp), Brazil. In 2002 he joined the Department of Mathematics at the Federal University of Paraná (UFPR), Brazil, where he works as an Associate Professor. His current research is focused on poset codes and, in particular, codes in the Rosenbloom-Tsfasman metric. In addition, he is pursuing research on actions and representations of Hopf algebras.

Jerry Anderson Pinheiro holds a Master’s degree (2011) and a PhD (2016), both in Mathematics, from the University of Campinas (Unicamp), Brazil, (2016), with studies at the University College Dublin, Claude Shannon Institute, Ireland (2013). His research interests lie in combinatorics, coding theory, discrete geometry and information theory.

“The book’s contents are well chosen and well structured, and the book is accessible and easy to read. … this is an excellent exposition on poset codes and will undoubtedly be used both as a work of reference for researchers and as a course book for undergraduate students.” (Thomas Britz, Mathematical Reviews, July, 2019)
“For a mathematically mature audience, this advanced monograph compiles and presents poset metrics in a systematic way. Instead of reading many papers, one can study the area all in one place. The book can be useful to mathematically oriented electrical engineering and computer science researchers.” (M. M. Tanik, Computing Reviews, October 17, 2019)