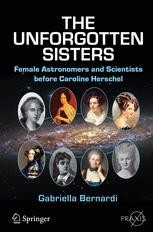 Taking inspiration from Siv Cedering’s poem in the form of a fictional letter from Caroline Herschel that refers to “my long, lost sisters, forgotten in the books that record our science”, this book tells the lives of twenty-five female scientists, with specific attention to astronomers and mathematicians. Each of the presented biographies is organized as a kind of "personal file" which sets the biographee’s life in its historical context, documents her main works, highlights some curious facts, and records citations about her. The selected figures are among the most representative of this neglected world, including such luminaries as Hypatia of Alexandra, Hildegard of Bingen, Elisabetha Hevelius, and Maria Gaetana Agnesi. They span a period of about 4000 years, from En HeduAnna, the Akkadian princess, who was one of the first recognized female astronomers, to the dawn of the era of modern astronomy with Caroline Herschel and Mary Somerville. The book will be of interest to all who wish to learn more about the women from antiquity to the nineteenth century who played such key roles in the history of astronomy and science despite living and working in largely male-dominated worlds.

Gabriella Bernardi holds a degree in Physics and a Master's degree in Popular Science. After having worked at Alenia Spazio in Turin (Rosetta mission), she decided to devote all of her time to science, and especially astronomy. She is currently a freelance journalist for magazines and periodicals and was also involved in the Planetarium and Museum of Astronomy and Space in Pino Torinese. Recently she won an Italian award for popular science journalism. Gabrielle is the author of three books of popularisation of astronomy for children and young people.

Honours, awards, and membership of any scientific societies:

“This is a fascinating volume. Each figure is introduced via a historical timeline, which supplies the wider context. … The Unforgotten Sisters is very well written, in a clear style, and is abundantly illustrated. … I very much enjoyed The Unforgotten Sisters and learned a great deal from it, and I warmly recommend it to all those interested in the history of astronomy.” (Allan Chapman, The Observatory, Vol. 137 (1257), April, 2017)

“The book gives short biographical accounts of over twenty women from ancient times to the beginning of 19th century. … It is also interesting to read some of the opinions of the lady astronomers about what they thought about such occupation for a female - who thinks it's wholly suitable and nothing should come in the way of a woman in science as they are in possession of equal faculties to any man … .” (AstroMadness.com, March, 2017)

“Bernardi’s work gives the comprehensive life stories of 25 female astronomers and scientists, beginning with Babylonian times through the 19th century. … Through the encouraging stories of the highlighted women and their sometimes forgotten contributions to the advancement of science, this work will surely provide inspiration for budding scientists to enter the field of modern astronomy. This work is highly recommended for courses that focus on women in science, as it will surely generate discussion. Summing Up: Highly recommended.” (M. C. Pavao, Choice, Vol. 54 (5), January, 2017)

“This book tries to fill in the gap in the field of Astronomy, where the contribution of the past female researchers is often neglected and forgotten. … to my knowledge this is the only one that tries to give a comprehensive review both in space and time, including for example Chinese and Korean women. Another specific feature of this book, is the attempt of enclosing the biographic and scientific information of the characters in a general historical framework.” (Alberto Vecchiato, Astrocom et al., astrocometal.blogspot.de, January, 2017)