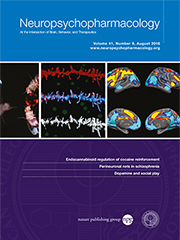 Recent studies indicate that nearly one-third of American adults have suffered from alcohol use disorder (AUD) at some point in their lives. AUDs are responsible for many medical, psychological, social, economic, and personal problems and are linked to impairments in how the brain manages stress, and to negative emotional states which in turn contribute to ongoing alcohol misuse.

Medications have become an important tool for treating alcohol use disorders (AUDs). Current medications are effective for some, but not all, patients, and new medications are needed to provide effective therapy to a broader spectrum of people with AUDs. Researchers at the National Institute on Alcohol Abuse and Alcoholism (NIAAA), part of the National Institutes of Health, now report that a new kind of medication may help reduce alcohol use in people with AUDs. A report of their findings is online in Springer’s journal Neuropsychopharmacology, published on behalf of the American College of Neuropsychopharmacology.

The researchers conducted a randomized clinical trial of a new compound, a vasopressin antagonist called ABT-436. Vasopressin (arginine vasopressin or AVP) is a neuropeptide produced in the hypothalamus of the brain. It helps to regulate the pituitary adrenal axis and other brain circuits involved in emotion. As such, it plays a role in regulating stress, anxiety, and their interaction with AUD.

The 12-week clinical trial included 144 alcohol-dependent adult men and women who were recruited from four sites in the US. During a 28-day baseline period, female participants consumed at least 28 drinks per week, while male participants consumed at least 35 drinks per week. Participants were then randomized to receive either placebo tablets or ones containing the ABT-436 compound. Researchers monitored participants’ alcohol consumption, as well as their mood changes and smoking habits, as these are known to co-vary with alcohol consumption.

Researchers found that participants receiving ABT-436 experienced more days of abstinence than those receiving the placebo. In particular, participants who reported high levels of stress appeared to respond better to ABT-436, in that both the frequency of their drinking and the number of heavy drinking days they experienced decreased. Overall however the decrease in heavy drinking days was not statistically significant between the ABT-436 and the placebo groups.

“Our findings suggest that future studies of ABT-436 should focus on populations of people with AUD who also report high levels of stress,” says first author Megan Ryan.

Smokers may be another population that could benefit from ABT-436. In addition to its effects on alcohol consumption, the new compound was also found to significantly reduce smoking among study participants. The researchers suspect that ABT-436 might be targeting the same areas in the brain that relate to withdrawal and stress, and, in the process, influencing both tobacco and alcohol use disorders.

About the journal Neuropsychopharmacology