Harlequin ladybirds are conquering the world at great speed 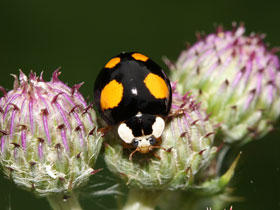 The arrival and subsequent dramatic increase in the number of the invasive alien harlequin ladybird in many countries has been met with considerable trepidation by the scientific community.

“The rapid spread of this species has inspired biologists to study the process of invasion on a global scale,” says Helen Roy of the Centre for Ecology & Hydrology in the UK. She is the lead author of a paper¹ in Springer’s journal Biological Invasions that includes the insights of researchers from 45 institutions worldwide about related global research endeavours. The paper is part of a special issue² just published on insect invasions.

The harlequin ladybird (Harmonia axyridis) was introduced to some countries as a biological control agent against agricultural pests such as aphids. It has however also spread to countries where it was not intentionally released. It especially poses a threat to local ladybird species and other insects that feed on aphids. First introduced to the USA in 1916, it has rapidly invaded parts of Canada, most of Europe, and a few South American and Southern and North African countries. Since being introduced to European Russia in 2010 for instance, it has expanded its range southwards by 300 kilometres per year. It established itself across the Netherlands within four years after being introduced. Part of its success seems to be its ability to thrive in many differing habitats and climatic conditions.

However, it is not a message of all doom and gloom from the research community. Aspects of the ladybird’s diet, habitat, and the climates in which it flourishes as well as factors that come into play in its spread have been studied. The insect has inspired global collaborations and provided the impetus for understanding biological invasions within and between various countries. Work has also been done to identify potential natural enemies that might regulate populations of harlequin ladybirds, such as the wasp parasite Dinocampus coccinellae which occurs worldwide and uses most types of ladybirds as a host.

The paper also highlights how so-called citizen science projects provide scientists with invaluable information with which to track the spread of ladybirds and other species. “The involvement of the public in monitoring this species in a number of countries around the world is inspiring and has provided data on scales that would be otherwise unachievable,” adds Roy. Such findings have led to the development of different approaches to surveying and monitoring other invasive alien species.

In the UK, for instance, members of the public use the online survey http://www.ladybird-survey.org to record information about the harlequin ladybird’s spread as well as for sightings of other ladybird species. The lessons learnt from such initiatives have helped develop approaches to citizen science and have inspired new projects both within and among countries.

“The coupling of citizen science approaches with global collaborations among researchers will provide the scale of information required to address some of the complex ecological questions that remain unanswered,” Roy says, explaining what the future holds for research related to the harlequin ladybird.