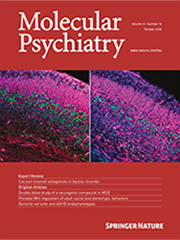 Prescription doses of folinic acid, which is a reduced form of a B vitamin known as folate, could help improve the language and communication skills of children with autism spectrum disorder (ASD). These are the preliminary findings from a placebo-controlled trial in which children were randomized to receive either high-dose folinic acid or a placebo, says lead author Richard Frye of Arkansas Children’s Research Institute in the US. The study, which is published in Springer Nature’s journal Molecular Psychiatry, also identified a specific blood marker that can be used to predict which patients have the best chance to respond to the treatment.

Up to two percent of American children are said to experience symptoms that place them on the autism spectrum. Many of these children have difficulty communicating and interacting with others, especially within a social setting. Researchers do not yet fully understand all the reasons behind the development of ASD and, importantly, there are currently no approved treatments that address the core symptoms of this disorder.

“The only currently approved medications for autism are both antipsychotic medications that address non-core symptoms and can lead to unwanted side effects,” says John Slattery, a co-author of the study.

Scientific research has linked this disorder to abnormalities in the metabolism of folate as well as genes that are involved in folate metabolism. Certain studies have also shown that the offspring of women who took folate supplements before conception and during pregnancy had a lower risk of having a child with ASD.

About ten years ago a condition, known as cerebral folate deficiency (CFD), was described in which the concentration of folate is below normal in the central nervous system but not in the blood. Many children with CFD had ASD symptoms and responded well to treatment with high-dose folinic acid.

Previously Frye’s team could show that folate receptor autoantibodies were found with a high prevalence in children with ASD. In the current study, these researchers found that participants with folate receptor autoantibodies had a more favourable response to the folinic acid treatment. This leads the way to a test that might be useful for clinicians to determine if high-dose folinic acid might be a treatment for a particular child with ASD. The deleterious effects of folate receptor antibodies on brain development and function are now confirmed in a laboratory rat model.

“Improvement in verbal communication was significantly greater in participants receiving folinic acid as compared with those receiving the placebo,” says Frye. He adds that the findings should be considered preliminary until the treatment has been assessed further in larger long-term studies.

The researchers indicated they were very pleased with the positive findings of this study, but caution that more research is needed in order to replicate the findings in a larger population.