Do male fish prefer them big and colourful?

Male Mexican fish are attracted to females with large bellies 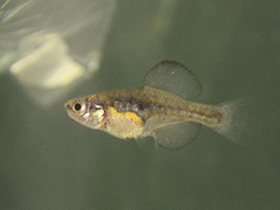 Male black-finned goodeid or mexcalpique fish know what they want when they pick a female to mate with; they prefer them big-bellied and as orange as possible. Interestingly, females displaying these traits are the ones most able to produce more offspring that survive, two researchers from the National Autonomous University of Mexico have found. The study by Marcela Méndez-Janovitz and Constantino Macías Garcia is published in Springer’s journal Behavioral Ecology and Sociobiology.

The black-finned goodeid (Girardinichthys viviparus) from Mexico is a very promiscuous species of fish, with males constantly seeking a suitable partner to mate with. The females are only sexually receptive for a few days every two months after giving birth. The black-finned goodeid is viviparous, meaning that young fish fully develop inside the female’s body before they are born.

Méndez-Janovitz and Macías Garcia wanted to find out how male black-finned goodeid decide which female to single out for their attention. Ten males were held separately under laboratory conditions. Each one was presented with two pregnant females at a time for fifteen minutes. The females were photographed to catalogue their size, colouration and belly size. The researchers took specific note of how swollen the females’ bellies were, as an indication of the number of offspring that they could be carrying.

Some of the females were visited for more than five minutes at a time and the time males spent with a female went hand in hand with the specific physical traits that she possessed. Males lingered longer with the wider bellied, and more orange-looking females. They also made more displays with their fins erect towards ones that possessed such traits. In a further experiment, it was found that the larger females were the ones who produced more offspring that ultimately could survive better. Colour did not play a role in this.

“Belly area had the largest and most positive influence on male behaviour,” explains Méndez-Janovitz. “Males made longer visits and performed more courtship displays to the females with wider bellies, while spending less time with thin-bellied females. They also made a greater effort to court females with bodies of a more orange hue.”

“Some attributes of the females are therefore linked to their reproductive value, and seem to influence how much time and effort males devote to court them,” adds Macías Garcia.