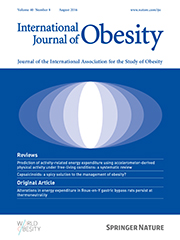 Toddlers who go to bed at regular times, and are better able to control and regulate their own emotions, are less likely to develop into obese pre-teens. This is according to a study led by Sarah Anderson of The Ohio State University College of Public Health, in Springer Nature’s International Journal of Obesity. It is the first study to investigate how young children’s experience of household routines relate to their self-regulation, and chances of being obese by their late childhood years.

Anderson’s research team investigated whether emotional and cognitive self-regulation are related to household routines in early childhood, and if both self-regulation and routines predict later obesity. They analyzed information of 10,955 children collected in the Millennium Cohort Study, a prospective, longitudinal study of a representative sample of children born in the UK between September 2000 and January 2002. When the children were three years old, their parents reported whether they had regular bedtimes and mealtimes and noted how much television or videos they watched. The parents also answered a questionnaire to assess the children’s levels of emotional and cognitive self-regulation. When the children turned eleven, they were weighed and measured. Their levels of obesity were defined according to international criteria.

The researchers established a link between emotional self-regulation and household routines at the age of three. This is consistent with previous research showing that children’s emotional regulation develops within a family context that includes routines. Emotional self-regulation and one of the three household routines in early childhood were independent predictors of obesity at age eleven. In particular, Anderson’s team found that children who always went to bed at the same time each night had a statistically significant lower risk of becoming obese compared to others. This finding adds to a growing body of literature on the importance of adequate sleep for childhood obesity prevention.

Their findings also shed light on the role that a family’s socioeconomic context in terms of parental education and household income plays in a child’s development. It predicts whether preschool-aged children will have routines around bedtime, mealtime, and limits on screen time.

“Parenting is more challenging when resources are limited; in addition to fewer routines and less structure, children living in poverty are more likely to experience the types of parental interactions that can undermine attachment security,” Anderson notes.

About the journal International Journal of Obesity