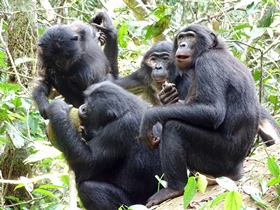 Bonobos are willing to share meat with ani​​​​​​​mals outside their own family groups. This behaviour was observed in the Democratic Republic of the Congo and is documented in a new study in Springer’s journal Human Nature. Even though bonobo apes have been studied for years, animal behaviourists have only realised in the past 25 years that these primates do not only eat plants, but similar to the common chimpanzee, also hunt and share their catch among members of their own social group. This study is the first observation of sharing behaviour across community borders and was led by Barbara Fruth of Liverpool John Moores University in the UK and the Royal Zoological Society of Antwerp in Belgium, and Gottfried Hohmann of the Max-Planck-Institute for Evolutionary Anthropology in Germany.

Fruth and Hohmann’s team witnessed the behaviour in January 2017 while studying two neighboring communities of bonobos (Pan paniscus) in a forest area near the Bompusa River. Researchers have previously noted that these communities hunt or eat meat twice a month on average. In most cases they opportunistically kill a small forest antelope called a duiker.

One afternoon, bonobos from the Bompusa West community met up with the Bompusa East bonobo community. After the alpha male of the West party caught a duiker, he was immediately approached by members of both communities. He moved into the crown of a tall tree, followed by nine females (four from the one group, five from the other) and their offspring. For the next half an hour, the researchers watched how he dished out some meat to all of them.

“Solicitation involved behaviours such as peering and stretched out hands but no aggression or forceful taking. As in other cases, the transfer of food from the male to females was passive,” remembers Fruth, who says that the pieces of meat given were immediately eaten.

One of the females from the East party then removed the duiker’s entire head to share pieces of meat with her offspring and adult females from both communities. A female from the West party only shared a leg from the carcass with her offspring and other female members of her party. Only the initial male participated in the meat-sharing episode, despite seven others being present.
The social structure of bonobos is dominated by females, and sex plays a major part in keeping the peace within a group. During the course of the meat-feeding period, the researchers also observed how females (even ones from different groups) rubbed their genitals together. A male mated with a female from an opposing community, while grooming between members of the different groupings also took place.

“No aggression was observed among females, between males and females, or among males, a behaviour not uncommon during other inter-community encounters,” notes Fruth.

“Cooperative behaviours such as hunting and food sharing play an important role in constructing models of human origins,” explains Hohmann. “Scrutiny of these behavioural patterns in our closest living relatives, the chimpanzee and the bonobo, provides potential insights into how our last common ancestor may have acted when dividing food with others.”

About the journal Human Nature