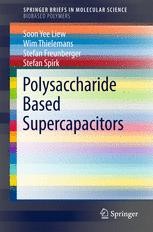 This book provides an excellent introduction into polysaccharide-based supercapacitors. It includes fundamental knowledge on supercaps as well as an overview of currently available approaches reported in the literature. Written by an international team of leading academics, this brief is aimed at a variety of readers with an interest in polysaccharide science and its applications.

Stefan Spirk studied chemistry (main focus synthetic inorganic chemistry) at University of Graz where he finished his PhD with Prof. R. Pietschnig. His research is mainly about understanding interfacial processes and how to use this knowledge to realize new applications for polysaccharide based materials such as batteries and transistors for instance. He is author of more than 50 publications, several book chapters and currently holds a Marie Curie Integration Grant and is part of a FET open project.

Stefan Freunberger studied chemistry at Vienna University of Technology, Austria. During this time he gained industrial experience in silicon chemistry and semiconductor technology with Wacker Chemistry and Infineon technologies in Germany. For his master’s and Ph.D. thesis he moved to the Swiss Federal Institute of Technology (ETH) Zurich and the Paul Scherrer Institute, Switzerland. The work, under the guidance of Prof. Alexander Wokaun and Felix Büchi was on polymer electrolyte fuel cells.

He is author of over 30 peer reviewed publications, including in Science, Nature Materials and Nature Chemistry, furthermore four patents and two book chapters. His work was presented at numerous lectures at major conferences, many of which invited. In 2012 Freunberger moved to ICTM at Graz University of Technology to build his own research.

eived his chemical engineering degree in 1999 from the University of Leuven (Belgium) and his PhD in Chemical Engineering in 2004 from the University of Delaware (Newark, DE, USA). Wim has over 70 publications and 1 patent and has an h-index of 24. In 2007, he won the Silver Award for his research in 2007 at the UK House of Commons Set for Britain event, and in 2008, received the Green Chemistry Prize for Innovative Science at the Gordon Research Conference for Green Chemistry. In 2013, he was also a co-recipient of the Presidential Green Chemistry Awards (USA). He has also held a 2011 Science Communication Fellowship from Advancing Green Chemistry and Environmental Health Sciences and has been a visiting professor to the University of Rouen (France) and a visiting scientist to Unilever R&D (Vlaardingen, The Netherlands).
Alles zeigen