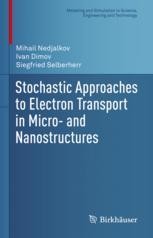 Stochastic Approaches to Electron Transport in Micro- and Nanostructures

The book serves as a synergistic link between the development of mathematical models and the emergence of stochastic (Monte Carlo) methods applied for the simulation of current transport in electronic devices. Regarding the models, the historical evolution path, beginning from the classical charge carrier transport models for microelectronics to current quantum-based nanoelectronics, is explicatively followed. Accordingly, the solution methods are elucidated from the early phenomenological single particle algorithms applicable for stationary homogeneous physical conditions up to the complex algorithms required for quantum transport, based on particle generation and annihilation. The book fills the gap between monographs focusing on the development of the theory and the physical aspects of models, their application, and their solution methods and monographs dealing with the purely theoretical approaches for finding stochastic solutions of Fredholm integral equations.

Mihail (Mixi) Nedjalkov holds a Ph.D. degree in Physics and a Doctor of Science degree in Mathematics from the Bulgarian Academy of Sciences (BAS). He is a Senior Researcher with TU Wien, Austria and an Associated Professor with BAS. He published over 200 papers and one monograph. His research interests include solid-state physics, modeling of classical (Boltzmann) and quantum (Wigner) electron transport in micro- and nanostructures, collective phenomena, and theory and application of stochastic methods.

Ivan Dimov is a Professor of Mathematical Modelling at the Institute of Information and Communication Technologies at the Bulgarian Academy of Sciences (BAS). His research interests include Monte Carlo methods, computational physics, parallel algorithms and GRIDs, and environmental mathematical modeling. He is author of more than 170 scientific papers, 4 monographs and 15 book editorships. He served as a Scientific Secretary with BAS and received the highest Bulgarian scientific award, the Marin Drinov medal on ribbon.

Siegfried Selberherr is a Chair Professor at the TU Wien, Austria. With his research teams, he has published about 2000 manuscripts in journals, in books, and in proceedings, including 3 monographs and about 50 edited volumes. His research interests are modeling and simulation for nano- and microelectronics engineering. He has received numerous honors; he is a Fellow of the Institute of Electrical and Electronics Engineers, of the Academia Europaea, and of the European Academy of Science and Arts.