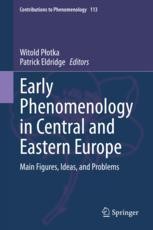 This book presents the origins of Central and Eastern European phenomenology. It features chapters that explore the movement's development, its most important thinkers, and its theoretical and historical context. This collection examines such topics as the realism-idealism controversy, the status of descriptive psychology, the question of the phenomenological method, and the problem of the world.

The chapters span the first decades of the development of phenomenology in Czechoslovakia, Poland, Romania, Russia, and Yugoslavia before World War II. The contributors track the Brentanian heritage of the development. They show how this tradition inspired influential thinkers like Celms, Špet, Ingarden, Frank, Twardowski, Patočka, and others. The book also puts forward original investigations. Moreover it elaborates new accounts of the foundations of phenomenology. While the volume begins with the Brentanian heritage, it situates phenomenology in a dialogue with other important schools of thought of that time, including the Prague School and Lvov-Warsaw School of Logic.

This collection highlights thinkers whose writings have had only a limited reception outside their home countries due to political and historical circumstances. It will help readers gain a better understanding of how the phenomenological movement developed beyond its start in Germany. Readers will also come to see how the phenomenological method resonated in different countries and led to new philosophical developments in ontology, epistemology, psychology, philosophy of culture, and philosophy of religion.

Witold Płotka, Dr. habil., is Associate Professor at the Institute of Philosophy at the Cardinal Stefan Wyszynski University in Warsaw. He was a visiting researcher at the Husserl-Archiv of the University of Cologne. His publications include articles on, for instance, the theory of intentionality, theory of knowledge, and the history of the phenomenological movement. He published two books: Studia z fenomenologii poznania. Transcendentalna filozofia Edmunda Husserla a problem wiedzy [Studies in the Phenomenology of Cognition. Transcendental Philosophy of Edmund Husserl and the Problem of Knowledge] (2015) and Fenomenologia jako filozofia mniejsza. Rozważania wokół sporów o metodę Husserla [Phenomenology as a Minor Philosophy. Considering the Controversies over Husserl’s Method] (2019). He edited also two-volumes of Wprowadzenie do fenomenologii [Introduction to Phenomenology] (2014), and co-edited (together with Peter Andras Varga) the Special Issue of the Horizon. Studies in Phenomenology (5(1), 2016) dedicated to phenomenology in Central and Eastern Europe. He is the winner of “The 2011 CARP Directors’ Memorial Prize in Honour of José Huertas-Jourda.” He is member of the Husserl Circle, former Secretary of the Polish Phenomenological Association, and President of the Central and East European Society for Phenomenology (CEESP). Recently he published, for instance, “Reduction and the Question of Beginnings in Husserl, Fink and Patočka” (Human Studies, 41(4), 2018), “From Psychology to Phenomenology (and Back Again): A Controversy over the Method in the School of Twardowski” (Phenomenology and the Cognitive Sciences, Online First, 2019), and “A Controversy over the Existence of Fictional Objects: Husserl and Ingarden on Imagination and Fiction” (Journal of the British Society for Phenomenology, 51(1), 2020).

Patrick Eldridge, PhD, is Assistant Professor in the Department of Humanities and Languages at the University of New Brunswick in Saint John. He obtained his doctorate at the Husserl Archives (KU Leuven) and was a visiting doctoral researcher at the University of Oregon. His research areas include Phenomenology, Philosophy of Memory, and Post-Kantian European Philosophy. He is the author of the articles: “Depicting and Seeing-in. The ‘Sujet’ in Husserl’s Phenomenology of Images,” Phenomenology and the Cognitive Sciences 17 no.3 (2018): 555-573; “Regret and the Consciousness of the Past,” International Journal of Philosophical Studies 25 no.5 (2017): 646-663; “The Punctum and the Past. Sartre and Barthes on Memory and Fascination,” Sartre Studies International 22 no.1 (2016): 117-131; “Observer Memories and Phenomenology,” Phenomenology & Mind 7 (2015): 213-223. He has translated numerous works from French and German into English, including works by Rudolf Bernet, Jan Assmann and (together with Nicolas de Warren) the correspondence between Krzysztof Michalski and Jan Patočka.