"I find this paper to be an excellent review of the theory of tidal disruption events and of the general relativistic effects that may be observable in this context. The topics are presented with very high clarity and the reference list is really exhaustive."

A tidal disruption event (TDE) ensues when a star passes too close to a supermassive black hole (SMBH) in a galactic center, and is ripped apart by its tidal field. The gaseous debris produced in a TDE can power a bright electromagnetic flare as it is accreted by the SMBH; so far, several dozen TDE candidates have been observed. For SMBHs with masses above ∼107 M⊙, the tidal disruption of solar-type stars occurs within ten gravitational radii of the SMBH, implying that general relativity (GR) is needed to describe gravity. Three promising signatures of GR in TDEs are: (1) a super-exponential cutoff in the volumetric TDE rate for SMBH masses above ∼108 M⊙ due to direct capture of tidal debris by the event horizon, (2) delays in accretion disk formation (and a consequent alteration of the early-time light curve) caused by the effects of relativistic nodal precession on stream circularization, and (3) quasi-periodic modulation of X-ray emission due to global precession of misaligned accretion disks and the jets they launch. We review theoretical models and simulations of TDEs in Newtonian gravity, then describe how relativistic modifications give rise to these proposed observational signatures, as well as more speculative effects of GR. We conclude with a brief summary of TDE observations and the extent to which they show indications of these predicted relativistic signatures. 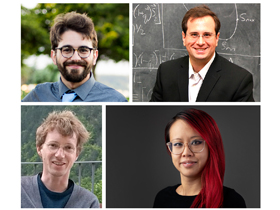 Nicholas Stone is a postdoctoral NASA Einstein Fellow in Columbia University's Astrophysics Laboratory, New York. His thesis on "Tidal Disruption of Stars by Supermassive Black Holes" (2015) was published in the Springer Theses series, which is recognizing outstanding PhD research.

Michael Kesden is an Assistant Professor in the Department of Physics of the University of Texas at Dallas. His research interests are Binary-Black-Hole Mergers and Tidal Disruption Events.

Roseanne Cheng is a postdoctoral researcher in the Computer, Computational, and Statistical Sciences (CCS) Division of Los Alamos National Laboratory.

Sjoert van Velzen is James Arthur Postdoctoral Fellow at New York University's Center for Cosmology and Particle Physics. He is searching for tidal disruption flares and using them to advance our understanding of black hole accretion.