In the 1950s, Herman Bondi observed that a very effective way to study gravitational radiation was to use null surfaces as part of the coordinate system for analyzing the Einstein (Einstein–Maxwell) equations. A particular class of such surfaces, (referred to as Bondi null surfaces) with their associated null tetrad, has now been the main tool for this analysis for many years; their use—until recently—has been almost ubiquitous. Several years ago we realized that there was an attractive alternative to the use of Bondi coordinates, namely to use coordinates (in the asymptotic null future space-time region) that were as close to ordinary at-space light-cones as possible—very different from Bondi surfaces. There were initially serious impediments to this program: these new null surfaces (referred to as asymptotically shear-free surfaces) were determined by solving a non-linear differential equation (the `good-cut' equation) whose solutions were most often complex. Eventually these problems were overcome and the program was implemented. In a series of papers, using the ASF null surfaces to study the asymptotically at Einstein (or Einstein–Maxwell) equations, a variety of surprising (strange) results were obtained. Using only the Einstein and Maxwell equations, we found a large number of the basic relations of classical mechanics. They included very detailed conservation laws, well know kinematic relations and dynamic equations and even the Abraham–Lorentz–Dirac radiation reaction force and the rocket force. As interesting as these were, they came with a serious enigma. These relations from classical mechanics had no relationship with the physical space-time. The space for the action of these relations was the parameter space of solutions of the good-cut equation—a complex space, known as H-space. The enigma—what possible relationship did these standard appearing classical relations have with physical space-time? It is the purpose of this work to establish such a relationship—objects in H-space are related to structures in physical space-time. For example, a complex world-line in H-space becomes in physical space-time an asymptotically shear-free null geodesic congruence where its twist describes its intrinsic spin and if charged, its magnetic dipole. 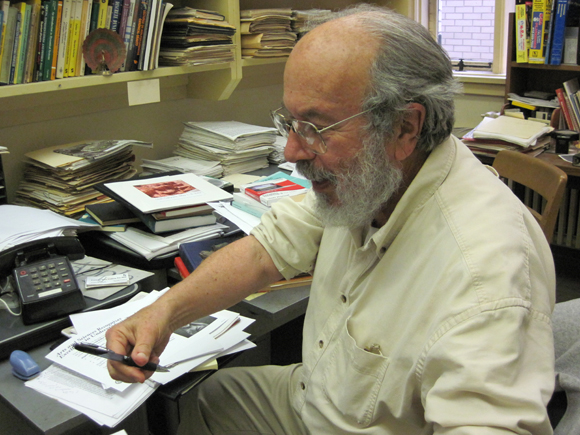 Ezra Ted Newman is Professor Emeritus in the Department of Physics & Astronomy at the University of Pittsburgh. His research is centered on general relativity – the Einstein equations for gravity. More precisely, on properties and the behavior of light rays in the presence of gravitational fields and how the gravitational field can be reconstructed from the properties of the light rays.

Newman was awarded the 2011 Einstein Prize from the American Physical Society:

"For outstanding contributions to theoretical relativity, including the Newman–Penrose formalism, Kerr–Newman solution, Heaven, and null foliation theory. For his intellectual passion, generosity and honesty, which have inspired and represented a model for generations of relativists."