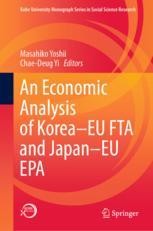 This monograph compares two trade agreements among three important economic regions, namely, the Korea–EU free trade agree (FTA) and the Japan–EU Economic Partnership Agreement (EPA). The two new types of agreements came into effect in the 2010s. They not only create more favorable trade and economic conditions in these regions but also produce spillover effects to bring about more comprehensive conditions in other area. First, the quantitative research for both agreements using the CGE model and a tentative analysis of the Japan–EU EPA in the analysis show that both have already created positive impacts on all three economies by lifting or reducing tariff and non-tariff barriers. Such positive impacts are also expected to be felt by SMEs in these countries that are involved. Additionally, the high level of tariff and non-tariff liberalization in the two current agreements will make positive impacts on the negotiation of other FTAs and on WTO reform. The advantages of the FTA and EPA dealt with in this book are not restricted to these economic effects. As the agreements are comprehensive, they will create more favorable social conditions not only in these economic regions but in other areas of Asia as well.

Masahiko Yoshii is a professor of economics and currently serves as executive vice president in charge of international exchange and university evaluation at Kobe University. He joined the Faculty of Economics there in 1985, and was promoted to full professor in 1998. He was the dean of the Graduate School of Economics at Kobe University in the years 2012–2014. He also has worked at the Embassy of Japan in Bucharest, Romania 1990–1992 and was a visiting researcher at the Vienna Institute of International Economic Studies (WiiW) 2001–2002. He was appointed as a Jean Monnet Chair for 2015–2018 and now serves as a coordinator of the Jean Monnet Centre of Excellence at Kobe University.

Chae-Deug Yi is a professor at the College of Economics and International Trade at Pusan National University (PNU), Republic of Korea. He received his Ph.D. in economics from Ohio State University, USA. He has worked as the founding director of the PNU EU Centre since 2009 and has been a Jean Monnet Chair holder in EU integration since 2010. He initiated and founded the ASIA – EU graduate student conference with Prof. Toshiro Tanaka (Keio University, Japan) in 2010. He has been teaching international trade and finance, econometrics, and EU economics at the Graduate School of International Studies, Law School, and College of Economics and International Trade, PNU, in Korea. He is now the president of the Korea Research Association of International Commerce. He held visiting professional positions in the USA at Duke University 2005–2006 and at UC Berkeley 2015–2016; and in China at Yeonbin University of Science of Technology in 2002. He also attended the International Negotiation Project, Harvard University, USA, 1997, and the Econometrics Summer Camp, Cambridge University, UK, 2019.

Dr. Yi participated in the World Jean Monnet Conference and World EU Centre Conference in Madrid, Spain, in 2010 and made a presentation on the Korea–EU FTA in Belgium. He was invited to the National Taiwan University and Ministry of Foreign Affairs of the Government of Taiwan to advise the EU–Taiwan ECA agreement. He was also invited to several international EU conferences as a speaker or discussant in Brussels, Madrid, Keio and Kobe universities (Japan), Irkutsk (Russia), Macao, Christ Church (NZ), Melbourne, Singapore, Taiwan, and Fudan University and Lenmin University (China), among others. He has published several books, including those on international commerce (1999), principles of international trade (2001), and international economics (2005). In addition, he has published more than 115 articles in leading Korean and international journals.