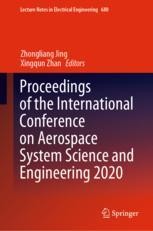 The book collects selected papers presented at the 4th International Conference on Aerospace System Science and Engineering (ICASSE 2020), organized by Shanghai Jiao Tong University, China, held on 14–16 July 2020 as virtual event due to COVID-19. It provides a forum for experts in aeronautics and astronautics to share new ideas and findings. ICASSE conferences have been organized annually since 2017 and hosted in Shanghai, Moscow, and Toronto in turn, where the three regional editors of the journal Aerospace Systems are located.

Prof. Zhongliang Jing received his B.S., M.S., and Ph.D. degrees from Northwestern Polytechnical University, Xi’an, China, in 1983, 1988, and 1994, respectively, all in Electronics and Information Technology. From 1983 to 1985, he was with the China Leihua Electronics Technology Institute, Aviation Industries of China. From 1988 to 2000, he was with the Department of Automatic Control, Northwestern Polytechnical University. In 2000, as the Cheung Kong Professor, he joined the faculty of the School of Electronic Information and Electrical Engineering, Shanghai Jiao Tong University, where he was Associate Dean from 2001 to 2004. From 2005 to 2018, he was Executive Dean of the School of Aeronautics and Astronautics, the Institute of Aerospace Science and Technology at Shanghai Jiao Tong University. From 2013 to present, he has been Director of the Engineering Research Center of Aerospace Science and Technology, Ministry of Education of the People’s Republic of China. From 2014 to present, he has been Director of the Shanghai Collegiate Key Laboratory of Aerospace Science and Technology. From 1997 to 1998, he was Research Associate and Senior Visiting Scholar of the University of California at Berkeley. In 1999, he was Visiting Professor of Southern Illinois University at Edwardsville, USA. His research interests include adaptive filtering, target tracking, information fusion, avionics integration, and soft robot control. He has published over 200 journal papers and 7 monographs. He is currently Editor-in-Chief of the Aerospace Systems, Springer. He has been the editorial board member of various journals such as the International Journal of Space Science and Engineering, the Information and Control, the Systems Engineering and Electronics, and the Manned Spaceflight. He also served as the editorial board member for various journals such as the Science China Information Sciences, and the Chinese Optics Letters.

Dr. Xingqun Zhan received his B.S. and M.S. from Harbin Engineering University, China, and his Ph.D. from Harbin Institute of Technology, China, in 1999. He is currently Tenured Professor on navigation and Associate Dean of Graduate Studies and International Affairs, in the School of Aeronautics and Astronautics at Shanghai Jiao Tong University. His research focuses on Global Navigation Satellite Systems (GNSS) integrity/vulnerability, seamless positioning, and GNSS/inertial coupling. Dr. Zhan is Associate Editor of Journal Aerospace Science & Technology and Associate Editor of Journal Aerospace Systems. He is co-chairing the United Nations International Committee of GNSS (ICG) Performance Enhancement Work Group (WG-B) since 2015.