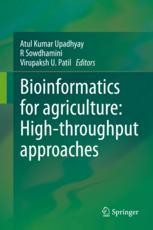 This book illustrates the importance and significance of bioinformatics in the field of agriculture. It first introduces the basic concepts of bioinformatics, such as homologous sequence and gene function analyses, determination of protein structures, and discusses machine learning applications for an in-depth understanding of the desired genes and proteins based on commonly used bioinformatics software and tools, e.g. BLAST, molecular modelling, molecular-docking and simulations, protein-protein and domain-domain interactions.

The book also describes recent advances in the high-throughput analysis of whole genome and transcriptome using next-generation sequencing platforms, and functional proteome studies. It also examines the role of computational biology in understanding and improving the nutrient quality and yield of crops. Lastly, the book explores a comprehensive list of applications of bioinformatics to improve plant yield, biomass, and health, and the challenges involved.

Dr. Atul Kumar Upadhyay is working as Assistant Professor at the Department of Biotechnology, Thapar Institute of Engineering & Technology (TIET), Patiala, Punjab, India. He has earlier served as an assistant professor in the Department of Biotechnology at Lovely Professional University, Jalandhar, Punjab, India (2016-2019). His research interest is in Bioinformatics and Biotechnology with a specialization in plant genomics. He has completed his PhD in Life Sciences from National Centre for Biological Sciences (NCBS), Bangalore; Tata Institute of Fundamental Research (TIFR), Mumbai, a public Deemed Research University (2010-2015). He has served as a reviewer for several international journals. He has more than four years of teaching experience in Computational Biology, Biotechnology, Molecular Modeling and Drug Design, Comparative Genomics, Bioinformatics. He has also published several research articles in the peer-reviewed international journal and authored or co-authored several book chapters.

Prof. Ramanathan Sowdhamini is an Indian computational biologist, bioinformatician and professor at the department of biochemistry, biophysics and bioinformatics of the National Centre for Biological Sciences, a TIFR research facility located in Bengaluru. Known for computational studies in the field of Protein Science, she is also associated with the Institute for Stem Cell Biology and Regenerative Medicine as a collaborator and is an elected fellow of the Indian Academy of Sciences as well as the Indian National Science Academy. In 2016, she was awarded JC Bose Fellowship by the Science and Engineering Research Board of the Department of Biotechnology, India. The Department of Biotechnology of the Government of India awarded her the National Bioscience Award for Career Development, one of the highest Indian science awards, for her contributions to biosciences in 2007.

Dr. Virupaksh U. Patil is working as a senior scientist at ICAR-Central Potato Research Institute, Shimla. He is in Indian Agriculture Research Service (ARS) system since 2009. He has worked in the field of structural and functional genomics of potato and its major pathogens and as a part of the International Potato Genome Sequencing Consortium (PGSC) representing India for successful completion of whole genome sequencing of Potato (Solanum tuberosum L.), which was later published in top most science journal Nature. Apart from this, he has also successfully sequenced the genomes of major potato pathogens like Phytophthora infestanx`s (late blight), Fusarium sambucinum (dry rot), Rhizactonia solani (stem rot) and Ralstonia solanacearum (Bacterial wilt).

He is presently working on deciphering the functionality of genes involved in potato biotic and abiotic stress tolerance like Draught, Disease (Late blight), Heat tolerance and Nitrogen Use Efficiency (NUE). He has been honoured with the AGRANI award, Certificate of appreciation from the Indian Potato Association (IPA) for outstanding contribution in potato development and also received the Award of Honour from the SelectBio 2016. He has published more than 30 research papers in high impact journals and authored more than 10 chapters and four books.