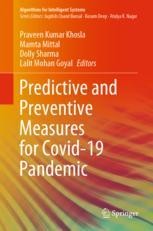 This book explores the inputs with regard to individuals and companies who have developed technologies and innovative solutions, bioinformatics, datasets, apps for diagnosis, etc., that can be leveraged for strengthening the fight against coronavirus. It focuses on technology solutions to stop Covid-19 outbreak and mitigate the risk. The book contains innovative ideas from active researchers who are presently working to find solutions, and they give insights to other researchers to explore the innovative methods and predictive modeling techniques. The novel applications and techniques of established technologies like artificial intelligence (AI), Internet of things (IoT), big data, computer vision and machine learning are discussed to fight the spread of this disease, Covid-19. This pandemic has triggered an unprecedented demand for digital health technology solutions and unleashing information technology to win over this pandemic.

Dr. P K Khosla received M.Tech. in Electronics & Communication from National Institute of Technology, Kurukshetra. He was awarded University Medal for being a topper. He passed Ph.D. in Electronics & Communication from Thapar University. He has recently passed a course in Advance Artificial Intelligence in Cyber Security from Carnegie Melon University, USA. He joined DRDO as Scientist B in 1986. He rose to become Scientist G in 2014.  In the intervening period, he was Founder of Embedded Systems Division of TBRL. The embedded products developed under his leadership have been successfully inducted into on-board systems such as missiles and aircraft. In 2018, he took over C-DAC, Mohali, as Executive Director. At C-DAC, he is working in the field of cyber security, healthcare technologies, e-governance, agri-electronics and artificial intelligence.  Cyber threat management system and national tele-consultation systems, which were developed under his leadership, have been successfully delivered to national level agencies. He is instrumental in bringing a turnaround in C-DAC Mohali in 2019–2020. He has published in several national and international journals, written book chapters and guided Ph.D. students. His relentless efforts have enabled scientists to unravel the previously unforeseen and latent issues in defence systems.  His work in IT systems has benefited millions of people.

Dr. Mamta Mittal graduated in Computer Science & Engineering from Kurukshetra University Kurukshetra in 2001 and received Master’s degree (Honors) in Computer Science & Engineering from YMCA, Faridabad. She has completed her Ph.D. from Thapar University Patiala in Computer Science and Engineering. She has been teaching from the last 16 years with emphasis on data mining, machine learning, soft computing and data structure. She is a lifetime member of CSI. She has published and communicated number of research papers in SCI, SCIE, Scopus indexed journals and attended many workshops, FDPs and seminars. She has filed two patents; one is on human surveillance system and another on wireless copter for explosive handling and diffusing. Presently, she is working at G.B. PANT Government Engineering College, Okhla, New Delhi (under Government of NCT Delhi), and supervising Ph.D. candidates of GGSIPU (Guru Gobind Singh Indraprastha University), Dwarka, New Delhi. She is Main Editor of the book entitled “Data Intensive Computing Application for Big Data” published by IOS press, Netherland, and another book entitled “Big Data Processing Using Spark in cloud” by Springer. She is Managing Editor of International Journal of Sensors, Wireless Communications and Control published by Bentham Science. She is working on DST approved Project “Development of IoT based hybrid navigation module for mid-sized autonomous vehicles.” She is Reviewer of many reputed journals, has chaired number of conferences and has delivered invited talks.

Dr. Dolly Sharma graduated in Computer Science & Engineering from Kurukshetra University in 2004 and received Masters in Information Technology with honors from Panjab University, Chandigarh, in 2007. She was the second University topper. She has completed Ph.D. in Computer Science and Engineering from Punjab Engineering College, Chandigarh. She is currently working as Associate Professor in Amity University, Noida. She has a rich teaching experience of around 13 years. Her area of interests includes bioinformatics, grid computing and data mining. She has published a number of research papers and book chapters indexed in Scopus and SCI. She has contributed as Reviewer in important conferences and journals. She has chaired international conferences and delivered invited talks. She is a lifetime member of ISTE and AIENG.

Dr. Lalit Mohan Goyal has completed Ph.D. from Jamia Millia Islamia, New Delhi, in Computer Engineering, M.Tech. (Honors) in Information Technology from Guru Gobind Singh Indraprastha University, New Delhi, and B.Tech. (Honors) in Computer Engineering from Kurukshetra University, Kurukshetra. He has 16 years of teaching experience in the area of theory of computation, parallel and random algorithms, distributed data mining & cloud computing. He has completed a project sponsored by Indian Council of Medical Research, Delhi. He has published many research papers in SCI indexed & Scopus indexed journals, and conferences. Two patents filed by him are also now published online. He is Reviewer of many reputed journals & conferences. He has given many invited talks in FDP and conferences. Presently, he is working at J. C. Bose Univ. of Sc. & Tech. YMCA Faridabad in the Department of Computer Engineering.