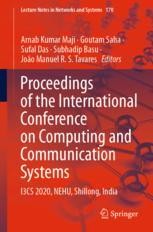 Proceedings of the International Conference on Computing and Communication Systems

This book contains the latest research work presented at the International Conference on Computing and Communication Systems (I3CS 2020) held at North-Eastern Hill University (NEHU), Shillong, India. The book presents original research results, new ideas and practical development experiences which concentrate on both theory and practices. It includes papers from all areas of information technology, computer science, electronics and communication engineering written by researchers, scientists, engineers and scholar students and experts from India and abroad.

Arnab Kumar Maji received B.E. degree in Information Science and Engineering from Visvesvaraya Technological University (VTU) in 2003 and M.Tech in Information Technology from Bengal Engineering and Science University, Shibpur (Currently IIEST, Shibpur) in 2005. He received his Ph.D. from Assam University Silchar (A Central University of India) in the year 2016. He has 16 years of professional experience. He is currently working as Assistant Professor (Stage-3) in the Department of Information Technology, North Eastern Hill University, Shillong (A Central University of India). He has published more than 30 nos. of articles in different reputed International Journals and Conferences.  He has published more than 20 nos. of articles as book chapter and co-authored 01 no. of book with several international Publishers like Elsevier, Springer, and IGI Global, McMilan International etc. 04 nos. of PhD scholars are currently pursuing Doctoral Degrees under his active supervision. He has also guided successfully 14 nos. of M.Tech thesis and 03 nos. of Ph.D. scholars. His Research interests include Machine Learning, Image Processing, and Natural Language Processing.

Goutam Saha received the B.E. degree in Electrical Engineering and the M.E. degree in Electronics and Telecommunication Engineering from the Bengal Engineering College, Shibpur, under the University of Calcutta, India in 1984 and 1989, respectively. He received the PhD degree from the Indian Institute of Technology, Kharagpur in 1999. He also has Post-Doctoral Research experience at the Indian Institute of Technology, Kharagpur and the Ben Gurion University, Israel between 2000 and 2001. Presently, he is working as a Professor in the Department of Information Technology, North-Eastern Hill University, Shillong, and is also holding the position of Head, Department of Information Technology at the same university. Dr Saha’s current research interests include computational biology, bioinformatics, systems biology, bioremediation, internet of things, software-defined radio, etc. Dr Saha has more than 50 research papers and has authored and co-authored two books. Dr. Saha also holds an international patent.

Sufal Das, Ph.D. (Technology), M.Tech (Computer Science and Engineering), B.Tech (Computer Science and Engineering) is an Assistant Professor of Department of Information Technology, North-Eastern Hill University Shillong. He is having nearly 10 years of professional experience. He has guided around 08 nos. of M.Tech Students. He has currently having nearly 20 publications in several national and International Conferences and Journal. His research area includes Big Data and Data Mining.

Subhadip Basu received his PhD (Engineering) degree from Jadavpur University in 2006 and did his post-doctoral research from the University of Iowa, USA, in 2010 and from the University of Warsaw, Poland, in 2012. He joined the Computer Science and Engineering Department of Jadavpur University in 2006, where he is currently working as a Full Professor since 2017. He also holds an honorary position as a Research Scientist at the University of Iowa, USA, since 2016. Dr Basu has more than 200 research publications in notable International Journals and Conference proceedings in the areas of Pattern Recognition, Machine Learning, Bioinformatics, Biomedical Image Analysis etc. He has edited eight books and has two US patents on image binarization methods. Dr Basu has worked at reputed International Institutes, like, Hitachi Central Research Laboratory, Japan, University of Iowa, USA, Bournemouth University, UK, University of Lorraine, France, University of Warsaw, Nencki Institute of Experimental Biology, Poland and Hannover Medical School, Germany. He has supervised eight PhD students and received several major research grants from UGC, DST and DBT, Govt. of India. Dr Basu is the recipient of the ‘Research Award’ from UGC, Govt. of India in 2016 and the DAAD fellowship from Germany in 2018. He has also received BOYSCAST and FASTTRACK fellowships from DST, Govt. of India, HIVIP fellowship from Hitachi, Japan, EMMA and CLINK fellowships from the European Union. He is the current Chairperson of the Computer Chapter, IEEE Kolkata Section, a senior member of IEEE and life member of IUPRAI.

João Manuel R. S. Tavares graduated in Mechanical Engineering at the Universidade do Porto, Portugal in 1992. He also earned his M.Sc. degree and Ph.D. degree in Electrical and Computer Engineering from the Universidade do Porto in 1995 and 2001 and attained his Habilitation in Mechanical Engineering in 2015. He is a senior researcher at the Instituto de Ciência e Inovação em Engenharia Mecânica e Engenharia Industrial (INEGI) and Associate Professor at the Department of Mechanical Engineering (DEMec) of the Faculdade de Engenharia da Universidade do Porto (FEUP). João Tavares is co-editor of more than 55 books, co-author of more than 50 book chapters, 650 articles in international and national journals and conferences, and 3 international and 3 national patents. He has been a committee member of several international and national journals and conferences, is co-founder and co-editor of the book series “Lecture Notes in Computational Vision and Biomechanics” published by Springer, founder and Editor-in-Chief of the journal “Computer Methods in Biomechanics and Biomedical Engineering: Imaging & Visualization” published by Taylor & Francis, Editor-in-Chief of the journal “Computer Methods in Biomechanics and Biomedical Engineering” published by Taylor & Francis, and co-founder and co-chair of the international conference series: CompIMAGE, ECCOMAS VipIMAGE, ICCEBS and BioDental. Additionally, he has been (co-)supervisor of several MSc and PhD thesis and supervisor of several post-doc projects and has participated in many scientific projects both as researcher and as scientific coordinator. His main research areas include computational vision, medical imaging, computational mechanics, scientific visualization, human-computer interaction, and new product development.