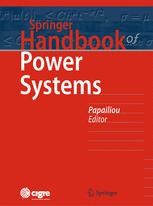 Edited by a renowned leader and expert in Power Systems, the book highlights international professionals’ longstanding experiences and addresses the requirements of practitioners but also of newcomers in this field in finding a solution for their problems.

The structure of the book follows the physical structure of the power system from the fundamentals through components and equipment to the overall system. In addition the handbook covers certain horizontal matters, for example "Energy fundamentals", "High voltage engineering", and "High current and contact technology" and thus intends to become the major one-stop reference for all issues related to the electrical power system.

Konstantin O. Papailiou has spent his entire career of more than 40 years in Power Systems and in particular overhead lines.  He received his doctorate degree from the Swiss Federal Institute of Technology (ETH) Zurich and his post-doctoral qualification as lecturer (Dr.-Ing. habil.) from the Technical University of Dresden, where he is also honorary professor. Until his retirement, he was CEO of the Pfisterer Group, a company he served for more than 25 years. He has held leading positions in various international technical societies and standardization bodies, and has authored a number of books and more than 100 papers.

Professor Papailiou is also active in power engineering education, teaching Master’s level courses on high-voltage transmission lines at the University of Stuttgart and the Technical University of Dresden.

Last but not least, Konstantin Papailiou is since many years strongly involved with CIGRE and has served as Chairman of the CIGRE Study Committee “Overhead Lines”. He is also the founding editor-in-chief of the CIGRE Science & Engineering Journal.

In 2020, he was awarded the CIGRE Medal, the organization's highest distinction for  members that have proven outstanding contributions to CIGRE and the engineering field.