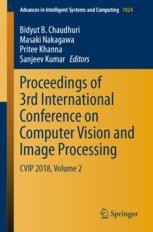 Bidyut Baran Chaudhuri is currently Pro Vice Chancellor of Techno India University, Salt Lake, Calcutta, India. Previously he was INAE Distinguished Professor at Indian Statistical Institute, Calcutta. He received his B.Sc. (Hons), B.Tech, and M.Tech. degrees from Calcutta University, India, and his Ph.D. from the Indian Institute of Technology Kanpur, in 1980. He did his postdoc work as Leverhulme fellow at Queen’s University, UK and acted as a visiting faculty at the Technical University, Hannover, Germany. His main research interests are in Pattern Recognition, Image Processing, Language processing and Machine learning in which he has published 450 research Papers and five books. He is a life fellow of IEEE, IAPR, TWAS as well as fellow of Indian Academies like INAE, INSA, INASc. He has received many awards for his research work. Prof. Chaudhuri is now an Associate Editor of the International Journal of Document Analysis and Recognition (IJDAR), International Journal of Pattern Recognition and Artificial Intelligence (IJPRAI). In the past he worked in such capacity in several other international journals.

Pritee Khanna is an Associate Professor and Head of the Computer Science & Engineering Discipline, PDPM Indian Institute of Information Technology, Design and Manufacturing, Jabalpur. Her main areas of interest include Biometrics, Biomedical Image Processing, Image Retrieval and Indexing, Dynamic Gesture Recognition, and Computer -Aided Product Design. She is a recipient of UGC Fellowship, India and Long Term JSPS Fellowship, Japan.  She is a senior member of the IEEE Computer Society and a life member of IAENG. She has published 89 papers in journals and conference proceedings.

Sanjeev Kumar is an Associate Professor of Mathematics at the IIT Roorkee, India. His areas of interest include Computer Vision & Mathematical Imaging, Inverse Problems, and Machine Learning. He completed his Ph.D. in Mathematics at the IIT Roorkee in 2008. He is a member of the IEEE Computer Society and International Association of Pattern Recognition, and a life member of the ACEEE and IACSIT. He has published over 40 papers in journals and conference proceedings.