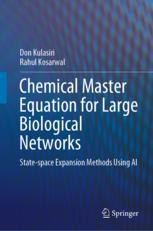 This book highlights the theory and practical applications of the chemical master equation (CME) approach for very large biochemical networks, which provides a powerful general framework for model building in a variety of biological networks. The aim of the book is to not only highlight advanced numerical solution methods for the CME, but also reveal their potential by means of practical examples. The case studies presented are mainly from biology; however, the applications from novel methods are discussed comprehensively, underlining the interdisciplinary approach in simulation and the potential of the chemical master equation approach for modelling bionetworks. The book is a valuable guide for researchers, graduate students, and professionals alike.

Don Kulasiri holds a chaired professorship in computational modelling and systems biology at Lincoln University, New Zealand, during the last 21 years, and he has been an academic over 30 years. He obtained his B.Sc. (Honours) in mechanical engineering at the University of Peradeniya, Sri Lanka, in 1980, and MS and Ph.D. in bio-engineering at Virginia Tech, USA, in 1988 and 1990, respectively. He has been a visiting professor in Princeton University, Stanford University, USA, and Oxford University, UK. His research has been ranked A (world-class) by the New Zealand government panels for the last 16 years, and he has graduated over 55 Ph.D. and 15 master’s students, and authored more than 180 publications including 3 research monographs. He founded and directs C-fACS.

Rahul Kosarwal has a PhD in Computer Science from Lincoln University, New Zealand, and his Masters and Bachelors of Engineering in IT and Electronics Communication, respectively from RGPV University, India. Since 2008, he has initiated and led several industrial projects in the field of Artificial intelligence, Big data Analytics, and Algorithms and has expertise in creating cloud-based solution architectures. He holds one patent on simulation technology and has a book published on this technology in Germany. He has served as an editorial board/program committee member of various journals and conferences held and conducted by various universities in the UK, Australia, Dubai, Poland, India, Canada, etc. He is also a recipient of India's Promising Young Professional Award 2011: Best Entrepreneur of the Country (Knowledge partners: NASSCOM, The Indus Entrepreneurs, Columbia Engineering).