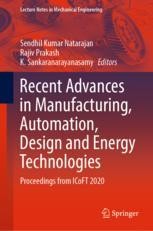 This book comprises the proceedings of the 1st International Conference on Future Technologies in Manufacturing, Automation, Design and Energy 2020. The contents of this volume focus on recent technological advances in the field of manufacturing, automation, design and energy. Some of the topics covered include additive manufacturing, renewable energy resources, design automation, process automation and monitoring, etc. This volume will prove a valuable resource for those in academia and industry.

Dr. Sendhil Kumar Natarajan is currently an Assistant Professor & Head in the Department of Mechanical Engineering, Associate Dean – Faculty Welfare, National Institute of Technology (NIT) Puducherry. He pursued his B.Tech. in Mechanical Engineering and M.Tech. in Energy Technology from Pondicherry Engineering College in 2001 and 2003, respectively, followed by Ph.D. in solar energy from Indian Institute of Technology (IIT) Madras in 2008. After his Ph.D., he joined as Senior R&D Engineer, at CSEM-UAE, Ras Al Khaimah, UAE. Later, he joined as a Post Doctoral Research Fellowship at Heriot-Watt University, Edinburgh, United Kingdom under European Union Project. He got young faculty award and outstanding researcher award in the field of Solar Thermal. He has published papers in 30 international journals and 40 national and international conferences in the area of energy. Based on his research work, he has filed four patents in the area of solar energy. He has three funded projects from DST-SERB as a PI for Concentrating Solar Systems, DST-UKIERI as a Co-PI for fuel cell research, and BRICS as a Co-PI for Solar Based Biomass Conversion. His research area lies in solar thermal system and CSP system, CPV, integration of high temperature solar thermal systems, heat transfer, fluid flow, and fuel cells.

Dr. Rajiv Prakash received his M.Tech. in Materials Technology from Institute of Technology Banaras Hindu University (IIT-BHU), India and completed his Ph.D. from Tata Institute of Fundamental Research, Bombay. Currently, he is a Professor of Materials Science and Technology, and Dean (Research and Development) of IIT-BHU. He has worked with the CSIR lab in Lucknow as a Scientist for over 7 years. He has been the recipient of Young Scientist Award (Council of Science and Technology), Young Engineer Awards (Indian National Academy of Engineering) of India and Materials Society Medal Award of India. His current research interests include architecture and design of functional polymers and nanocomposites for their applications in organic electronic devices and sensors/biosensors. He is participating as PI/Coordinator in various National Mission projects like Technology Innovation Hub, IMPRINT, SPARC and Energy Mission projects of the Department of Science and Technology, Government of India. He has published over 200 publications in international journals of repute and has 20 patents in his credit.

Dr. K. Sankaranarayanasamy is serving currently as Director of NIT Pondicherry, formerly a professor of Mechanical Engineering at National Institute of Technology Tiruchirappalli, received his B.E. Mechanical Engineering (Hons) in 1981 from PSG College of Technology, India. He received his M. Tech Production Engineering in 1983 and Ph.D. in 1989 from Indian Institute of Technology Madras, India. His research targets finite elements simulation of welding Process. Ergonomics study and Gear Design. He has authored more than 75 papers in international and national journals and has attended conferences in Slovak Republic, China, America and Austria. To his credit, he has completed several sponsored projects (total worth of Rs. 60 lakhs) funded by BHEL, Trichy, NLC Neyveli and DST. He served in administrative responsibilities such as Head of the Department, Dean and Director of NIT.