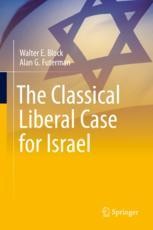 The Classical Liberal Case for Israel

As such, this work explores the history of the Jewish State, both to provide a positive case for its right to exist, and to clarify the myths surrounding its origin and development. At the same time, it deals with other relevant related subjects, such as the complex situation between Israel and the Palestinian Arabs, the military campaigns against the Jewish State, the connection between anti-Zionism and anti-Semitism, and Israel’s economic miracle.

The thorough analysis presented in this work intends to show not only why the voices and movements against Israel are wrong (including the Boycott, Divestment and Sanctions movement, BDS), but more importantly, why Israel is an example of human flourishing and freedom that every advocate for liberty should celebrate.

The Classical Liberal Case for Israel makes the practical and moral case for Israel. It is based on truths and facts that need to be repeated over and over.
Block & Futerman understand that the only way to defeat a big lie is with a big truth.

Classical Liberalism, often associated with the spread West from Northern Europe in creating free nations, is argued here as applying to Israel, with ancient roots in the principles of human freedom.

Walter E. Block is Harold E. Wirth Endowed Chair and Professor of Economics, College of Business, Loyola University New Orleans, and senior fellow at the Mises Institute. He earned his PhD in economics at Columbia University in 1972. He has taught at Rutgers, SUNY Stony Brook, Baruch CUNY, Holy Cross and the University of Central Arkansas. He is the author of more than 500 refereed articles in professional journals, two dozen books, and thousands of op eds. He lectures widely on college campuses, delivers seminars around the world and appears regularly on television and radio shows.  He is the Schlarbaum Laureate, Mises Institute, 2011; and has won the Loyola University Research Award (2005, 2008) and the Mises Institute’s Rothbard Medal of Freedom, 2005; and the Dux Academicus award, Loyola University, 2007.
Alan G. Futerman is Adjunct Professor of Institutional Economics at the University of the Latin-American Educational Center (Rosario - Argentina). He has done research on economic theory from the perspective of the Austrian School of Economics, dealing with macro and microeconomics, as well as epistemology and the methodology of economics. He has contributed essays to journals such as International Journal of Finance & Economics, Journal of Financial Economic Policy, The Review of Austrian Economics, and lectured on economic subjects in congresses and seminars.