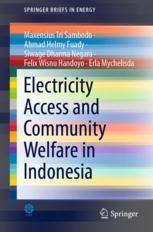 This book represents a synthesis of research findings on energy in remote rural areas in East Nusa Tenggara in Indonesia, demarcating a localised understanding of electricity issues that are relevant to similar community profiles in other developing countries, which are facing similar challenges. The authors discuss several key issues relating to electricity access in the Indonesian context, such as government energy expenditure and policies for geothermal development. The book also presents empirical estimates of the social effects of electricity access. In focusing on an underdeveloped area in eastern Indonesia affected by innumerable problems relating to poverty, the book contributes to related discussions on the first Sustainable Development Goal in proposing possibilities for poverty reduction vis-à-vis improved energy infrastructure. It demonstrates the impact of electricity access on people's welfare. Co-published with the Indonesia Institute of Science (LIPI), this updated edition is a valuable reference for policymakers and scholars interested in the electricity sector in Indonesia and rural areas in developing countries elsewhere. It appeals to specialists researching and working in the energy sector and is also interested in scholars and practitioners focused on sustainable development and Indonesian policymaking more broadly.

Maxensius Tri Sambodo is a senior researcher at the Indonesian Institute of Sciences (LIPI) Economic Research Center. He is also a visiting fellow alumnus from the Institute of Southeast Asian Studies (ISEAS), Singapore. His research interests are on economic development, energy, environment, and natural resources. He obtained a bachelor’s degree in Economics from Padjadjaran University, Indonesia, his Masters in International and Development Economic from the Australian National University, Australia, and his Ph.D. in Public Policy from the National Graduate Institute for Policy Studies (GRIPS), Japan. His latest book publication appeared in: From Darkness to Light: Energy Security Assessment in Indonesia’s Power Sector published by ISEAS Yusof Ishak Institute, Singapore 2016; and for journal appeared in Energy Policy 2019, 123(132):113-121, with co-authors with Rio Novandra, on the title the state of energy poverty in Indonesia and its impact on welfare.

Siwage Dharma Negara is a senior fellow at the Institute for Southeast Asian Studies at ISEAS Yusof Ishak Institute in Singapore. He is a coordinator for the Indonesia Studies Programme and also a coordinator for the Singapore APEC Study Centre at the institute. Before joining ISEAS in 2014, he was a researcher at the Indonesian Institute of Sciences (LIPI). He has advised and consulted to the World Bank Jakarta (2008-2014). He is currently an editorial member of Journal of Southeast Asian Economies. His research interests include macroeconomic and development issues, regional connectivity, industrial and trade policies with special focus on Indonesia. He holds a Ph.D. in economics from the University of Melbourne, Australia.

Ahmad Helmy Fuady is a researcher at the Research Center for Area Studies, Indonesian Institute of Sciences (P2SDR-LIPI). He graduated from the Gadjah Mada University, Yogyakarta (BA), and from the Australian National University, Canberra (MIDEC). He obtained his doctorate degree from the University of Amsterdam, with a dissertation titled, "Elites and Economic Policies in Indonesia and Nigeria, 1966–1998". He has worked on a wide range of development issues, such as poverty alleviation, rural electrification, regionalism and industrialization. Since 2013, he has developed his interest in social and institutional aspects of rural electrification.

Felix Wisnu Handoyo is originally from Jakarta. He finished his Bachelor of Economics (S.E.) from Universitas Gadjah Mada, Yogyakarta, cum laude, in 2011. He previously worked in the Indonesian Economic Development Committee (KP3I) of Coordinating Ministry of Economic Affair, from 2011 to 2013. He was then a junior researcher at the Economic Research Center of the Indonesian Institute of Sciences (LIPI) from 2014. In 2019, he earned his Master of Science in Economics from the Department of Economics at the University at Buffalo, State University of New York (SUNY). He was an awardee of the USAID-Prestasi scholarship. He has published two books chapters and one monograph. His research focuses on economic development, microeconomics, and health economics. He is also interested in quantitative and economic analysis more broadly.

Erla Mychelisda is a junior researcher in Economic Research Center, Indonesian Institute of Sciences (LIPI). She holds master’s degree in Banking and Finance from Monash University, - Australia, and a bachelor’s degree in Management from Universitas Jenderal Soedirman. She is a recipient of 2016 Australia Awards Scholarship. Her research interests include small and medium enterprises (SME), energy security, E-commerce, banking, and finance.