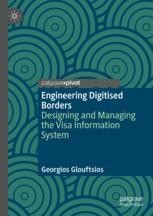 This book focuses on the Visa Information System (VIS): a large-scale data infrastructure interconnecting a multiplicity of state authorities that enact border security and migration management in the European Union. The VIS is embedded within a setting of pan-European IT systems that filter international mobility, identify threatening elements, hamper the travels of poor, racialized, and alienated subjects, while at the same time facilitate the circulation of those expected to generate financial and other kinds of capital. The book examines the engineering of the VIS by analyzing how it was designed before its deployment in the field of border security, and how it is maintained to ensure continuous and secure operation. It illustrates how engineering processes that render the VIS functional are not just technoscientific, but inherently political, as they (re)configure and maintain the power to govern international mobility by digital means.

Georgios Glouftsios is Postdoctoral Researcher and Contract Professor at the University of Trento, School of International Studies. His work sits at the intersection of Critical Security Studies, International Political Sociology, and Science and Technology Studies. His current research focuses on technologies used for border security, law enforcement and migration management in the European Union.

“Engineering Digitised Borders offers a rich and detailed examination of how the Visa Information System was produced and maintained. By telescoping into the detailed micropractices of digitised borders, it demonstrates a remarkable ability to show us why these actions matter politically, and what is at stake when humans and materials combine to enact border decisions. Glouftsios’s analysis of VIS is careful, patient and utterly necessary as we debate the transformation of bordering in Europe and beyond.”

“Engineering digital borders presents in-depth field research within an outstanding analysis of digital infrastructures for borders and migration. The book explicates how the design and maintenance of large databases are in themselves controversial and political acts that matter in how political visions of borders come into being in the 21st century. It will set a standard for future research on digital borders and be of interest to students and practitioners.”

“What are the digitised borders traversing and stretching Europe today? How and where are they crafted, monitored and maintained? These are important questions which this impressive book answers, making it essential reading not just for scholars of borders and migration but anyone interested in the politics at stake in novel practices of governing territories, populations and mobilities”.