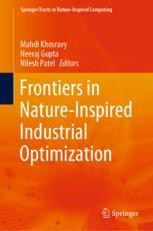 The book provides a collection of recent applications of nature inspired optimization in industrial fields. Different optimization techniques have been deployed, and different problems have been effectively analyzed. The valuable contributions from researchers focus on three ultimate goals (i) improving the accuracy of these techniques, (ii) achieving higher speed and lower computational complexity, and (iii) working on their proposed applications. The book is helpful for active researchers and practitioners in the field.

Mahdi Khosravy was born in Birjand city, Iran, 1979. He received B.Sc. in Electrical Engineering (bio-electric) from Sahand University of Technology, Tabriz, Iran, and M.Sc. in Biomedical Engineering (bio-electric) from Beheshti University of Medical Studies, Tehran, Iran. Mahdi received his Ph.D. in the field of information technology from the University of the Ryukyus, Okinawa, Japan. He was awarded by the head of university for his excellence in research activities. To grow his international experience in education and research, in September 2010, he joined the University of Information Science and Technology (UIST), Ohrid, Macedonia, in the capacity of assistant professor. In 2016, he established a journal in information technology in UIST as currently hold its executive editorship. UIST professorship helped him a lot to extend his international collaborations. In July 2017, he became an associate professor. From August 2018, he joined the Energy lab in University of the Ryukyus as a visiting researcher. Since April 2018 to October 2020, he was jointly a visiting associate professor in Electrical Engineering Department, Federal University of Juiz de Fora in Brazil. From November 2019 to March 2021, he was an appointed researcher in media-integrated laboratories, University of Osaka, Japan. Since, April 2021, he is aan AI research scientist in Cross Labs, Cross compass Ltd., Tokyo, Japan.

Neeraj Gupta was born in India in November 1979. Multidisciplinary graduation studies provide him the ability to make fusion of different engineering fields to explore cutting-edge research in optimization, information technology, network design, image and smart grids. He got a Diploma in civil engineering (specialized in environmental and pollution control) in 1999, Bachelor of Engineering in electrical and electronics engineering in 2003, Master of Technology (M.Tech) in engineering systems in 2006, and Ph.D. in economic operation of power systems (power ∧ control) in February 2013 from IIT Kanpur, India. He worked as a postdoctoral fellow (Sr. Project Engineer) at Indian Institute of Technology (IIT) Jodhpur, India, for one year (June 2012–May 2013). Thereafter, he joined the same institute as faculty (May 2013 – August 2014). He has also two years of industrial along with academic experience before M.Tech. He was an assistant professor at the University for Information Science and Technology, “St. Paul the Apostle,” Ohrid, Macedonia, from 2014 to 2017. From 2017, he is an assistant professor at the Department of Computer Science and Engineering, Oakland University, USA. Along with he is serving as a consultant of MIS200 Inc and Global Defense Electronics Inc. Due to the exposition of different engineering fields and wide research domain, his current research interests are in the field of optimization, smart grid technology, smart cities, big data problem, multi-agent modeling, IoT and applications, development of heuristic optimization algorithms, particularly in the area of multilateral and real-time operation of the complex systems.

Nilesh Patel is an associate professor in the Department of Computer Science and Engineering at Oakland University, Rochester, Michigan. Prior to his tenure at Oakland University, he served as an assistant professor at University of Michigan, Dearborn. In addition to his academic service, Dr. Patel served as a software architect and a software engineering manager at Ford Motors and Visteon Corporation, where he played an instrumental role in design and development of first voice-enabled vehicular control and GPS navigation systems. His research interest includes deep machine learning, pattern recognition, visual computing, evolutionary computing, and big data analytics.