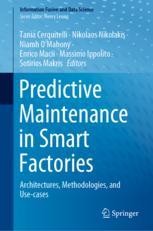 This book presents the outcome of the European project "SERENA", involving fourteen partners as international academics, technological companies, and industrial factories, addressing the design and development of a plug-n-play end-to-end cloud architecture, and enabling predictive maintenance of industrial equipment to be easily exploitable by small and medium manufacturing companies with a very limited data analytics experience. Perspectives and new opportunities to address open issues on predictive maintenance conclude the book with some interesting suggestions of future research directions to continue the growth of the manufacturing intelligence.

Tania Cerquitelli has been Associate Professor at the Department of Control and Computer Engineering of the Politecnico di Torino, Italy, since March 2018. Her research activities have been mainly devoted to fostering and sharing research and innovation on automated data science and machine learning solutions,  explainable artificial intelligence strategies, and interpretable predictive and descriptive modeling techniques. Tania has designed and developed novel, scalable and general-purpose algorithms to extract new forms of knowledge patterns in different industrial settings, from robotics industry to energy-related applications. She has been serving on the program committee of some major international conferences (e.g., KDD since 2018; ECML-PKDD since 2017, ICDM since 2020) on data mining and machine learning research area. Tania is a co-editor of a Springer book titled “Transparent Data Mining for Big and Small Data” with Dr Daniele Quercia and Prof. Frank Pasquale. Tania has published more than 100 scientific publications and has served as referee for many international journals. Tania has been a member of the editorial board of the Future Generation Computer Systems journal (Elsevier) and the Computer Networks journal (Elsevier) since March 2020, and a member of the editorial board of the Knowledge and Information Systems journal (Springer) since November 2020. Tania has been involved in many European and Italian research projects addressing different research issues related to machine learning and data analytics. Tania has been Professor of courses in Introduction to Databases and Business Intelligence for Big Data courses at the Politecnico di Torino since 2011. She got the master’s degree with honours in Computer Engineering (in 2003) from both Politecnico di Torino, Italy, and the Universidad De Las Américas Puebla, Mexico, and the Ph.D. degree (in 2007) from the Politecnico di Torino, Italy.

Nikolaos Nikolakis has been working as a Research Engineer at the Laboratory for Manufacturing Systems & Automation in the Mechanical Engineering Department of the University of Patras (UPAT) in Greece, since 2014. His primary research activities focus on design, planning and control of production systems. He participated in various EU-funded research projects, such as Know4Car, INTERACT, SYMBIO-TIC, SERENA, Sense&Mine4.0, RAMEN and MAS4AI. He has served as a Reviewer in several journals (RCIM, IET, JMS, IJCIM). He holds a Diploma (M.Sc. equivalent) in Electrical & Computer Engineering from UPAT (2014), a Ph.D. in Cyber-Physical Production Systems from UPAT (2020) and an MBA from Hellenic Open University (2020).

Niamh O’Mahony is Principal Research Scientist with Dell EMC Research Europe, based in the Centre of Excellence in Ireland. Her primary research interests include building solutions that apply machine learning and AI to domains like security, networking and industrial processes and leveraging edge-to-cloud infrastructure to host those solutions. She completed a Ph.D. in Verification Strategies for CDMA Acquisition in 2010, under joint supervision from University College Cork, Ireland, and the University of Calgary, Canada. Prior to joining Dell EMC, Niamh worked at Universidad Carlos III de Madrid as Postdoctoral Researcher, focusing on health-related applications of inertial sensors, and led the team responsible for wearable sensor data processing algorithms and applications at Shimmer, Dublin, Ireland. She has participated in various EU-funded and national research projects, such as TERAPOD, SERENA, CUTLER (H2020), SOLAS, SPARKS (FP7), uService (ITEA 2) and COMONSENS (CONSOLIDER-INGENIO 2010).

Enrico Macii was born in Torino, Italy, on February 7, 1966. He is Full Professor of Computer Engineering at Politecnico di Torino. Prior to that, he was Associate Professor (from 1998 to 2001) and Assistant Professor (from 1993 to 1998) at the same institution. From 1991 to 1997, he was also Adjunct Faculty at the University of Colorado at Boulder. He holds a Laurea Degree in Electrical Engineering from Politecnico di Torino (1990), a Laurea Degree in Computer Science from Università di Torino (1991) and a Ph.D. degree in Computer Engineering from Politecnico di Torino (1995). From 2009 to 2016, he was Vice Rector for Research at Politecnico di Torino; he was also Vice Rector for European Affairs (2007-2009), Vice Rector for Technology Transfer (2009-2015) and Rector’s Delegate for International Affairs (2012-2015). His research interests are in the design of electronic digital circuits and systems, with particular emphasis on low power consumption aspects. In the last decade, he has extended his research activities to areas such as energy efficiency in buildings, districts and cities, sustainable urban mobility, and clean and intelligent manufacturing. In the fields above, he has authored over 550 scientific publications (H-index = 44, G-index = 82, total citations: 9109, most cited paper: 941 citations—Source: Google Scholar, April 29, 2019).

Massimo Ippolito currently holds the position of Head of Digital Innovation & Infrastructures at Comau, where he has been working since 2012. He is also Member of the Board of Directors of the European Factories of the Future Research Association (EFFRA) from 2015. Ippolito holds a Ph.D. in “Industrial Production Engineering” from Parma University and a M.Sc. in “Computer Sciences” at the University of Milan. He has extensive experience in methodologies and tools for product and production system design. Since 2000, he has been involved in various international research projects in the product design and manufacturing area, ranging from methodologies for product design for manufacturing to process design for energy efficiency. From 2007 to 2012, within Centro Ricerche Fiat, he was responsible of an innovation research program related to manufacturing topics.

He has been involved in more than fifty RTD projects funded by the EC, acting as Senior Researcher, Project and Technical Manager in major EC funded projects in the topic of reconfigurable and flexible manufacturing systems.  He has been an Associate editor for three (3) International Scientific Journals and a reviewer for more than thirty (30) International Journals and a large number of International Conferences. He has published more than 140 articles. He has given a number of invited talks to the Industry and several scientific presentations and invited talks in International Workshops organised by the European Commission.